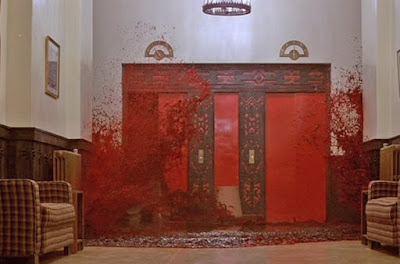 Today is the 40th Anniversary of Stanley Kubrick’s classic adaptation of Stephen King’s THE SHINING.

But what I want to share in this post is something that happened the weekend after that film’s release when as a 10-year old I went to see BON VOYAGE, CHARLIE BROWN (AND DON’T COME BACK!). To the best of my memory, I went alone with my Mom dropping me off for the movie at the Ram Theatre (a truly wretched theater) in downtown Chapel Hill.

There I was sitting through the trailers munching on popcorn or candy (I can’t remember) when a shot of two elevator doors in a hotel lobby filled the screen. As creepy music plays, the title THE SHINING, and “A Stanley Kubrick Fim,” ascend from the bottom of the shot, followed by credits for Jack Nicholson and Shelley Duvall, then the declaration that the film is based on “Stephen King’s Best-Selling Masterpiece of Modern Horror.”


As the music gets louder and more ominous, the credits get repetitive – the title again goes upward and Kubrick’s name is re-stated. Moments later, gallons of blood begin to pour out of the sides of the elevator doors. The blood continues to flow in mass quantities enough to move about furniture in the lobby. The trailer ends with the camera lens being covered in blood, and with me scared out of my 10-year old mind.

This was the trailer before a Charlie Brown movie!

I was waiting to see the shenanigans of Snoopy and gang and got treated to an ocean of blood. Good grief.

I remember being so shaken by the big screen bloodbath that it was hard to pay proper attention to the light-hearted animated matinee I came to see.

These days, the trailers are often programmed to match the genre of the movie that they supporting. So if you are going to an action movie, you’re likely to see trailers for other action movies proceeding the main feature. But back then it seems they just threw whatever they had up on the screen, not caring if they freaked out kids who just wanted some Peanuts™.

In the 40 years since, I’ve seen THE SHINING many times on the big and screen, and I’ve revisited the trailer a bunch of times which, of course, is so less frightening than I remember, but still packs a bloody punch.

I wonder if trailers for BON VOYAGE, CHARLIE BROWN ever played before showings of THE SHINING. That’s one thing I can think of that would even the score.

Another would be for me to watch a double feature of both movies. Maybe then I could finally make peace.

Happy 40th to THE SHINING and BON VOYAGE, CHARLIE BROWN!