Now playing at an indie art house near me:

SLEEPING WITH OTHER PEOPLE 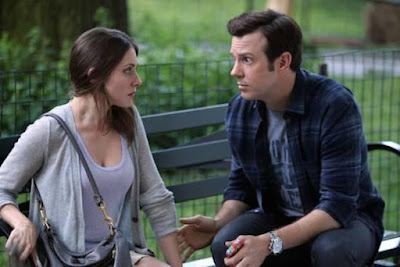 I don’t think it would be accurate to label this an anti-rom com, because it really doesn’t subvert or satirize the formula, but I would say that it’s probably the among the most profane romantic comedies I’ve ever seen. Which makes sense since it was co-produced by Will Ferrell and Adam McKay.

From its opening in which boy (Jason Sudekis), meets girl (Alison Brie) while at college, to its premise that over a decade later the couple attempts a platonic friendship, writer/director Headland’s follow-up to her 2012 debut BACHELORETTE often resembles a foul-mouthed, raunchy remake of WHEN HARRY MET SALLY, but that’s so not a bad thing.

You see, since Sudekis’ Jake and Brie’s Lainey lost their virginity to each other on the roof of his dorm back in 2002, they’ve both had scores of failed relationships.

Jake and Lainey run into each other at a sex addict support meeting in the present day and start hanging out, but with the understanding that because they screw up every sexual relationship they’ve had, they should just be friends. They even come up with a safe word should the sexual tension ever gets to be too much: “mousetrap,” abbreviated from “dick in a mousetrap.”

Lainey, who is a kindergarten teacher, is still pining for another guy from her college days that she’s been seeing on and off, Adam Scott as the mustached OB-GYN Matthew Sovochek, who Jake considers one of the most boring people ever. It’s a constant hang-up for Lainey that Matthew is going to marry somebody else.

Jake, who with his business partner (Jason Mantzoukas) is about to get rich from selling a tech patent to a major company, has his eyes on his boss (Amanda Peet), but from the get go we know he’s really in love with Lainey.

There’s also the hilarious highlight of a scene halfway through in which Jake and Lainey attend a children’s pary at Mantzoukas and his wife (Andrea Savage) while tripping on ecstasy and we get a bikini-topped, cut off wearing Brie teaching the kids to dance to David Bowie’s “Modern Love.” “Why don’t we do drugs?” Savage asks Mantzoukas longingly while watching.

With the amusingly self deprecating Brie building likable layers on top of her work on Mad Men and Community, and Sudekis putting in a less smarmy, and far wittier turn than his HORRIBLE BOSSES persona (or his SNL characters for that matter), there’s a lot of genuine warmth in the humor and in the tender touches of drama here.

It may be very dirty-minded, in that even the indie rock songs on the soundtrack drop the f-bomb (I’m looking at you, The Echo Friendly!), with plenty of plot points that you can see coming from the theater parking lot, but SLEEPING WITH OTHER PEOPLE is pleasing time spent with people who you want to get together. It’s a warm and fuzzy film about wanting to f*** your best friend. That’s the best way I can put it.