Now playing at indie art house near me: 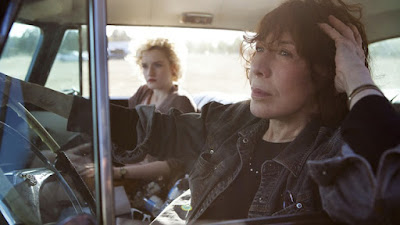 Lily Tomlin’s first starring role on the big screen since 1988’s BIG BUSINESS is a pure delight. Tomlin plays Elle Reid, a no-nonsense 70-something aged lesbian poet, who we accompany through a day of helping her 18-year old granddaughter Sage (Julia Garner) raise money for an abortion.

In the film’s opening scene, Tomlin’s Elle breaks up with her much younger girlfriend (Judy Greer), and we get a glimpse of the vulnerability under her tough veneer when we see her sobbing in the shower afterwards.

Then Garner’s Sage shows up, 10 weeks pregnant and cash poor, asking for help, but Elle is also broke, pointing out that she cut up her credit cards and made a wind chime out of the little pieces.

The two drive around Los Angeles in Elle’s rickety old ‘55 Dodge to try and gather the funds for the procedure scheduled for later that afternoon, starting with a stop at Sage’s loser boyfriend’s (Nat Wolff ) where Elle turns his own ice hockey stick against him because he refuses to pony up the dough.

Elle and Sage then hit up Orange is the New Black’s Laverne Cox as a tattoo artist that owes Elle money, they attempt to sell a stack of Elle’s first editions of feminist classics to Elizabeth Peña in one of her last roles as a crusty café owner, and make an ill-advised visit to one of Elle’s former lovers, Karl played Sam Elliot, who is still a bit bitter about the past.

Their last resort is to turn to Sage’s mother Judy (a perfectly prickly Marcia Gay Harden), a strict corporate lawyer-type, who both Elle and Sage are intimidated by (“I’ve been scared of your Ma since she was five years old,” Elle quips).

Written and directed by Paul Weitz (AMERICAN PIE, ABOUT A BOY), who previously worked with Tomlin on the Tina Fey/Paul Rudd rom com ADMISSION, GRANDMA is a punchy 79 minute comedy drama that has not one wasted moment. Tomlin carries the movie beautifully, delivering extremely amusing dry wise-cracks throughout, but her most affecting moments are when her character laughs to herself, remembering something her recently passed long-time partner, said or did. Tomlin’s portrayal of Elle is so lived-in that we don’t need any more back story than that to go by.

Tomlin’s co-stars also get a chance to shine. Garner, who’s had roles in PERKS OF BEING A WALLFLOWER, MARTHA MARCY MAY MARLENE, and on the FX show The Americans, brings a fragile yet determined presence to the coming-of-age arc of Sage. Elliot lets his trademark stoicism slide for one of his most nakedly emotional performances, and Greer, despite being in several big ass releases this last summer (ENTOURAGE, JURASSIC WORLD, ANT-MAN, and TOMORROWLAND) actually gets to have a substantial part here as Tomlin’s ex.

GRANDMA may be a small, low budget movie that was filmed in only 19 days for less than $1 million, but it boasts a big-time lead by Tomlin, which is deservedly stirring up Oscar buzz. That would be nice for her to at least get a nomination, but what I really hope it really stirs up is more leads for the lady. It’s incredibly obvious from this that there’s lots of fire left in her belly.