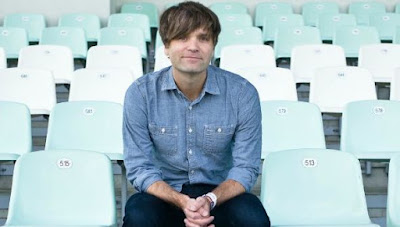 Earlier this week, The Modern School of Film’s series, Film Acoustic, moved its program from the Carolina Theatre in Durham to the N.C. Museum of Art in Raleigh for a screening of Richard Linklater’s 1991 breakthrough debut SLACKER.

The film was the choice of Death Cab for Cutie front man Ben Gibbard, who, in the tradition of the series, took part in a discussion after the screening and performed a few songs for the folks in attendance. MSOF founder and moderator Robery Milazzo told the audience in his intro at the Museum’s open-air theater that “this is our first-ever outdoor event,” and that he “absolutely hates watching movies outside,” but that “tonight’s movie is right in the pocket of a movie that screens really well outside.”

Milazzo was right, SLACKER did indeed screen really well, except for the fact that it was really cold that evening. Linklater’s film, which concerns a day in the life of Austin, Texas with the roaming camera going from eccentric character to another, was well received by the crowd, some of who were smarter than me and brought blankets, but I could tell from the vibe that they were more there for Gibbard.

After the film ended, Milazzo brought out his guest of honor with these words: “It’s really amazing that for a movie that quotes Tolstoy, Nietzsche, and Madonna, to have with us someone that Spin Magazine called ‘the poet laureate of the young and hopeful.’” The audience applauded and wooed “Professor Ben Gibbard,” as Milazzo called him, as he walked onstage to talk SLACKER, and various other related, and non related, topics.

Here are some highlights:

On why he choose SLACKER:

Gibbard: “It was a movie that I saw when I was going to college in Billingham, and it really resonated with me because I recognized so many of these characters in my friends and myself. Conversations that are happening throughout this movie are the kind of pseudo intellectual college conversations that you have at the time feel really deep, but once you kind of remove from them you recognize how silly some of them were.

But I just love the fact that this movie takes place over 24 hours in Austin, Texas, and it does such a great job of putting forth the minutiae of what happens in a college town. The absurd, but also kind of beautiful moments as well; the humor. It really resonated with me when I saw it and I come back to it every couple of years, and still really enjoy it.

How SLACKER has served as inspiration:

Gibbard: “To come back to that word ‘minutiae’ I’ve always enjoyed focusing on small moments in life and tried to blow them up and make them something larger than they actually were, and I think that in this movie you have all these little vignettes that flow fairly seamlessly as one character passes another then the camera follows them. And, you know, there are obviously some kind of funny, silly moments in it, but there are also some kind of beautiful moments there.

Like I love that scene with the elderly man walking at the end of the movie, and we’ve actually been using – without permission – the audio from that as an opening track when we walk out on this tour because I just love that. I just love that, it’s kind of a wonderful way that encapsulates the characters in the film by having this older gentlemen at the end talk from a place of authority, and experience about a lot of the smaller moments that have happened throughout the movie. And some way or another, I just think that’s really a beautiful little soliloquy he has in there.”

On the Austin, Texas locations of SLACKER:

Gibbard: “The thing that’s interesting about watching this film now, 25 years after it was shot, is seeing how much Austin has changed. There’s the scene in the little dinner where the woman is like ‘you should quit, you should quit…’ and I remember making a pilgrimage to that diner one of the first times I went to Austin because I really wanted to see it and I walked in and that same guy was working there. This was like 2001…the guy who comes over and says ‘smarten up’ or whatever. I walked in and it blew my mind that he was standing right there, but across the street…

Gibbard: “No, he didn’t – he just kinda looked at me and I walked out. But, no, I remember in the movie as the guy is walking into the diner, you can see it’s just like the skyline of Austin in the background, and nothing, just some warehouses. Now, there’s like a massive Whole Foods and condos, and it’s been interesting to see, you know, as I watch this movie I’m aware of where a lot of it was shot, just how much the city has changed. It’s the same when I see movies that take place in my hometown of Seattle, how much the city has grown and changed.

Milazzo: “We’re here in Raleigh, North Carolina, and there are a lot of those sort of cities – smart cities, smart communities, uh, I guess when you watch this movie, is this an inspiring vision of America? As awful a question as that sounds – is there any melancholy in this change for you when you watch this film?”

Gibbard: “Uh, it’s not really melancholy, I think that these kind of conversations and characters still exist in every college town in America, you know? For me, I see this film and it reminds me of a time in my life where these things were of the utmost importance.


I look back at that time in my life fondly, that these conversions and these characters and the people that I knew in my own version of this were kind of like folk heroes of my college experience. You know, the townie who worked at the bar, the guy who’s in 15 bands, all that stuff, these people – you knew ‘em. And I think these people still exist, they’re just that age now.

Milazzo: “It funny, if you cast actors here you’d think ‘ah, those people don’t exist.’ But the fact that he used real people brings it to life in this kind of cool way.”

Gibbard: “I actually have an interesting story about that. Years ago, this was 2000, and we were playing a show in Baton Rouge, Louisiana, and we had been warned that the sound guy at this particular club was kind of ornery, but we kind of warmed up to him, we kind of hung out with him, and he seemed so familiar, but I couldn’t place him. He was kind of a heavy set guy, kind of balding. I was like ‘I know this guy from somewhere.’ We were going home later, going back to a place we were staying with this person, and I was like ‘man, that guy looks so familiar!’ And she was like ‘you, know he’s Steve with a van from SLACKER.’ And I was just like, ‘what?’ It was like the first movie star I met. I was like, ‘I can’t believe it!’ I was almost glad that I didn’t recognize him because I would’ve like bothered him all night.”

With a little prompting by Milazzo, Gibbard picked up his guitar and played a few songs between the chit chat starting with “Title Track” off of Death Cab for Cutie’s 2000 album “We Have the Facts and We’re Voting Yes.”

After some strained talk about the writing process (move it along, Milazzo!), Gibbard fittingly tackled “A Movie Script Ending,” from 2002’s “The Photo Album,” took a stab at Nirvana’s “All Apologies” (he started playing the riff then said “I’m not gonna be able to do this”), did a rough but still solid version of “Steadier Footing” (also from “The Photo Album”), and concluded his appearance with a stunningly superb rendition of “I Will Follow You into the Dark” from 2005’s “Plans,” which you can watch a crude video of his performance that somebody recorded on their phone.

A final anecdote, in response to an audience member’s question about what is a favorite song of Gibbard’s that he has returned to again and again:

Gibbard: “It’s not so much because of the lyrical content, and it might seem like a strange choice, but I really believe that “There She Goes” by The La’s is like the most perfect song ever written. It’s a perfect song – it’s short, it feels like you’ve heard it before but you haven’t.

And someone might hear that song and go like ‘that’s just a light pop song – like, I could write that.’ Well, no you couldn’t…because you would’ve written it if you could. And that entire record is like that for me, but that song in particular, like you know there’s a lot of covers of it in the world, it’s kind of a ubiquitous song, but whenever the original comes on I have this moment like ‘God, this is like an amazing song.’

I had this moment, this is name dropping so forgive me, but years ago, Death Cab was playing a festival in Japan, and Teenage Fanclub is my all-time favorite band, they were playing…it was us, then Teenage Fanclub, then The La’s – they were doing a reunion.

So it was really crazy, and I’m standing next to Norman (Blake) from Teenage Fanclub, he was like one of my heroes from the time I was 14, and they go into ‘There She Goes’ and he turns to me and says ‘Man, classic pop song, right?’ ‘Yeah!’ ‘It’s crazy that it’s about heroin, right?’

And I was like ‘what?’ I never thought of that angle on the song. And it just changed it all for me. This moment where somebody, who’s one of my heroes, was giving me information that I hereto did not have and it’s changing the whole song for me.”