Now playing at every multiplex from here to a galaxy far, far away:

STAR WARS: THE RISE OF SKYWALKER 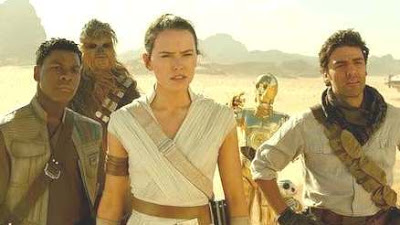 So, here we are. The highly anticipated ninth episode of the Skywalker saga is here and it’s a chaotically overblown piece of pure spectacle. By the end of its two hour and 21 minute running time, I was too worn out to judge whether it was a satisfying conclusion to the series that started back in 1977, so I’ll try to hash that out here.

This last time deals with the battle between the Rebels and The Empire – sorry, that’s the Resistance and The First Order. Darth Vader wannabe Kylo Ren (Adam Driver) discovers that dark lord, Palpatine (Ian McDiarmid), last seen being thrown into the Death Star’s reactor by Vader in RETURN OF THE JEDI (1983), is still alive and has assembled a massive fleet of Star Destroyers.

After conferring with General Leia Organa (the late Carrie Fisher in footage mostly cut from THE FORCE AWAKENS), our heroes Rey (Daisy Ridley), Finn (John Boyega), Poe Dameron (Oscar Isaac), Chewbacca (Joonas Suotamo), and the droids C-3PO (Anthony Daniels), and the roly-poly cutie BB-8, set out to find a McGuffin, a Sith Dagger to be exact, that will possibly lead them to Palpatine. There is also another McGuffin, a Sith Wayfinder – a small pyramid shaped compass that also may lead them to the former Emperor of the Galaxy. I think.

Amid these plot points are bombastic light saber duels between Kylo Ren and Rey, who still have the Force connection going for them, as well as some sexual friction; blaster-fire aplenty, and a ginormous space battle that is like the similar finales of STAR WARS and RETURN OF THE JEDI times a hundred.

I didn’t mind the obvious bits of fan service as it was fun to see Billy Dee Williams reprising Lando Calrissian, or Chewie cheating at holochess, Wedge, Ewoks, Jawas, and a few surprise cameos, but when it comes to Palpatine – is he really enough of a fan favorite to resurrect? I like McDiarmid, but it seems they couldn’t come up with a good enough villain and had to reach back 30 years for one.

I enjoyed RISE OF SKYWALKER quite a bit, but I’m feeling fatigue from the whole damn series. I’ll still watch The Mandalorian (love Baby Yoda!), but after this exhausting and sometimes incoherent entry, I hope they take a long break between RISE and another STAR WARS movie.

I feel that I, and the hoards of over-critical fans, deserve it.

Opening tomorrow at every multiplex in the galaxy: 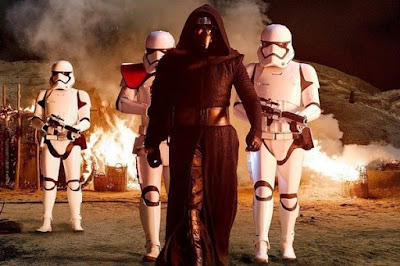 As suspected, J.J. Abrams is much, much better suited for STAR WARS than STAR TREK.

It captures the spirit and replicates the story beats of the original 1977 film so lovingly that it is almost a virtual remake, but that back-to-basics approach hugely works in its favor because, unlike the awful prequels, it’s not cluttered and all over the place.

Now, in order to keep from revealing major spoilers – the kind that would keep people from reading reviews like this in the first place – I’ll try to be as vague as I can with plot points, and other juicy tidbits.

It’s 30 years after the events in RETURN OF THE JEDI, and instead of the Empire and the Rebel Alliance we now have “The First Order,” and “The Resistance.” Darth Vader’s successor, clothed in similar black attire with metal mask and cape, Kylo Ren (Adam Driver), is, of course, trying to crush The Resistance and find Luke Skywalker who’s gone missing.

On a desert planet that highly resembles Tatooine, but is called Jakku, we meet a scavenger named Rey (Daisy Ridley) who befriends BB-8, that cute orange and white spinning droid you’ve probably seen in trailers and TV teasers, who is being hunted by The First Order because he’s carrying a secret message to be delivered to The Resistance. Sound familiar?

Meanwhile, John Boyega (ATTACK THE BLOCK) plays a storm trooper who defects and joins forces with Rey, under the guise that he’s in The Resistance. Fleeing from The First Order, Rey, Finn, and BB-8 happen upon The Millenium Falcon in a space ship junkyard, and luckily it still holds together for their escape.

Before long the Falcon is captured by a large freighter owned by famed smuggler, and rebel hero Han Solo (Harrison Ford in his most invested performance in eons) and that beloved hairy Wookie, Chewbacca (Peter Mayhew), who, unlike Han, hasn’t aged a day.

That’s as much of the plot as I need to go into. You can most likely guess that there is a new Death Star (Starkiller Base) to destroy, a cantina-like scene, light saber battles, X-Wings and Tie Fighter dogfights, and revelations about who’s related to whom.

Carrie Fisher reprises her role as Leia Organa, now a General, with Anthony Daniels back as C-3PO, and Kenny Baker back inside R2-D2, but he hasn’t been the same since Master Luke vanished. 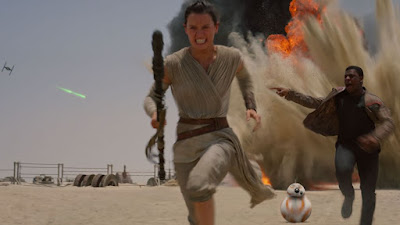 The new kids, Boyega and Ridley, have great gusto and likable pluck in their roles and are a lot of fun to watch run around through battle station corridors, Endor-like forests, and snowy Hoth-type terrain. It’s like they split the role of Luke into the two characters, who both long for better destinies before getting swooped up into the galactic battle between good and evil.

As for Luke, we all know that Mark Hamill has signed back on, but going into how he appears would be ultra spoilery so I won’t go there.

As for the other new characters, Oscar Isaac, who gets some wise-cracks in (he also appears to be having more fun than I’ve ever seen him have in a movie), plays Poe Dameron, an ace X-Wing fighter pilot for The Resistance; a stern Domhnall Gleeson (Isaac’s EX MACHINA co-star) plays the evil First Order General Hux, Lupita Nyong’o plays the motion capture-enhanced alien pirate/bar owner Maz Kanata (sort of the movie’s Yoda), and Andy Serkis lends his distinctive talents to embodying the sinister Supreme Leader Snoke (another motion-capture creation), the new Emperor-esque figure.

And who knew that Driver, best known as Lena Dunham’s weird, lanky boyfriend on the HBO show Girls, would make such a great STAR WARS villain? He nails the intensity needed for Kylo Ren, and gives him just the right amount of ache as well.


It’s also nice that their dialogue, written by Abrams, Michael Arndt (LITTLE MISS SUNSHINE, TOY STORY 3), and returning series scribe Lawrence Kasdan, is sharp and witty with just the right amount of call backs. This is especially notable in Han and Leia’s scenes, though I wish they fought a little, with that old Tracy/Hepburn-ish back and forth so memorable in THE EMPIRE STRIKES BACK. Fisher, who had to slim down to reprise the part, brings gravitas in the form of her older, dignified Leia, but they could’ve given her a little more to do. However, that’s a small complaint considering.

George Lucas may have created STAR WARS, but somewhere along the line he lost its vision. Abrams sure found it here, as one of the best things that I can report is that while watching THE FORCE AWAKENS, I really did forget about the prequels. Abrams’ film is so immensely entranced with the look, feel, and tone of the original trilogy that all that nonsense about senate treaties, midichlorians, Qui-Gon Jinn, Palpatine, etc. never comes to mind. It’s remarkable how successful it is in rendering Episodes I-III non-canon.

Sure, there’s lots of CGI, but little of the aforementioned clutter of the prequels or many recent sci-fi action films. I really appreciate that Abrams had real sets and models built, and relied on practical effects when possible. David Mindel’s cinematography lovingly apes the look of the original trilogy, as John Williams reworks all the mighty musical cues of his previous series’ scores effectively.

As a rekindling of the magic of the space opera that I loved as a kid, STAR WARS: THE FORCE AWAKENS is a fantastic success. Abrams really pulled off a wonderful, faithful, funny, and intoxicatingly fun entry that had me from the first line of the opening crawl to its powerful last shot. For the first time since 1983, STAR WARS is really back.

When Han says “Chewie, we’re
home,” he might as well be speaking for the masses that are going to eat this up, and go back
again and again for more.