Now playing on Netflix, and a smattering of indie arthouses: 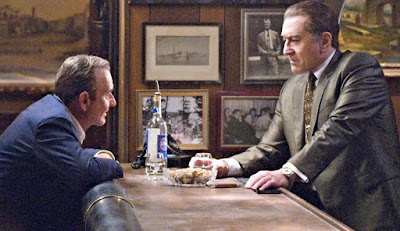 Martin Scorsese’s long-awaited mob epic, THE IRISHMAN, has been a subject of controversy since its release for a couple of strong reasons.

Second, there’s the fact that the film is a Netflix production and after a brief, limited theatrical release it will be shown on the streaming service starting on November 27.

This reason is the one that heavily irks both the heads of major theater chains like Regal, Cinemark, and AMC, who passed on showing the film; and movie buffs who believe such a work by a world renowned master filmmaker would be best seen on the big screen.

Having seen it on the big screen, I concur with this sentiment as it’s a towering achievement that’s not only one of Scorsese’s best films, it’s a fitting finale to the director’s signature gangster game changers from MEAN STREETS to THE DEPARTED. But mainly it harks back to GOODFELLAS, and, to a lesser extent, CASINO, both of which starred De Niro, and Pesci.

Based on the Charles Brandt’s 2004 true crime novel, I Heard You Paint Houses, the film paints the story of Frank Sheeran (De Niro), who talks us through his tale from a wheelchair in a nursing home, sometimes in voice-over; sometimes talking directly to the camera.

In its sequences dealing with Hoffa, the movie treads over a lot of the ground as Danny DeVito’s 1992 biopic HOFFA, albeit in a much more entertaining manner. Overall, many scenes echo those of many a mob epic – the kills, the arrests, the intense exchanges full of dangerous doubletalk, etc. – yet somehow Scorsese and screenwriter Steve Zaillian (who previously worked with Scorsese on GANGS OF NEW YORK) have been able to construct a narrative that makes these strands compelling all over again.

When it comes to the depiction of gangster Joey Gallo Joseph “Crazy Joe” Gallo, oily portrayed by Sebastian Maniscalco, we are treated to the questionable scenario that Sheeran was his murderer. In this scene, I kept wondering if Scorsese was tempted to include Bob Dylan’s song “Joey” on the soundtrack as the track lays out Gallo’s Italian restaurant killing. But I bet since he just put out a three hour concert doc about Dylan, from the same period he put out “Joey,” I can see why he resisted.

As for the women in the cast (yes, there are women in the cast), there’s Stephanie Kurtzuba as Frank’s wife Irene Sheeran, Kathrine Narducci as Carrie Bufalino, and Welker White as Josephine “Jo” Hoffa, but they aren’t given much to do except be concerned on the side.

However, it’s a different matter when it comes to Anna Paquin as Frank’s daughter Peggy Sheeran. Paquin’s Peggy highly suspects her father’s crimes, especially when Hoffa disappears and she is correct in her assumption that her father was involved. This causes a rift that continues well into his old age as we see in the film’s last 30 minutes.

THE IRISHMAN may appear to be daunting as its running time is three hours and twenty-nine minutes, but I never get bored or antsy. The performances are all top notch from the bit players to all of the A-List ensemble. The VFX didn’t distract me much either as it was convincing enough to make me forget about it. There were actually times when I felt like I was watching a De Niro movie made in the ‘80s or ‘90s.

It’s a poignant story about aging, but Frank doesn’t appear to have any real regrets. He’s clinging to the old memories as they are all he has left after his family and friends have gone. This adds up to a powerful portrait of pathos and De Niro’s finest performance in ages. His partner Pesci, in his first film in nearly a decade, puts in a restrained and measured piece of work that hugely adds to the film’s gravitas.

Sure, it would’ve been nice to see this movie have a wider release so more people could see it on the big screen, but that it exists at all is reason to rejoice (Scorsese went with Netflix because Paramount Pictures back out over the huge expense – the film’s final budget was $159 million).

So whether you can find it at an arthouse *, or settle in for a night for Netflix viewing, you can take comfort that, no matter the venue, you’re in the great hands of Marty’s latest masterpiece.

* The film is getting some independent theater action, so I strongly encourage you to seek it out – it’s no doubt a must see movie on the big screen. 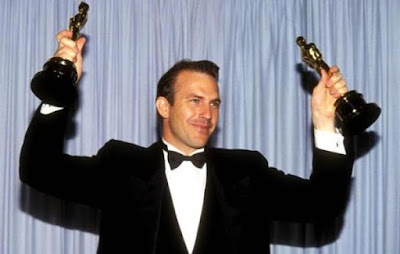