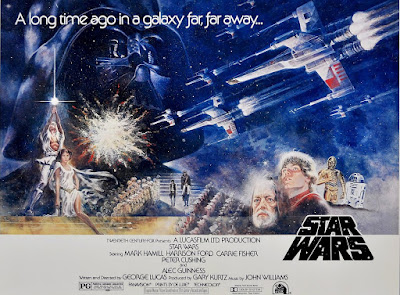 Not long ago, a film writer or fan (I can’t remember which, and the post is hard to locate) made a plea on Facebook for critics not to all start their reviews of STAR WARS: THE FORCE AWAKENS, releasing this week if you haven’t heard, by stating how much the original movie or trilogy meant to their childhoods.

It’s a good point, as the experiences of so many folks with the series are identical, mine included: As a kid, I grew up on STAR WARS (still not calling it A NEW HOPE, dammit!), THE EMPIRE STRIKES BACK, and RETURN OF THE JEDI, as an adult hated the prequels, and as an older adult I have a sliver of hope that J.J. Abrams will deliver a new entertaining entry that lives up to at least some of the hype.

But, in the interest of keeping it out of my review, I do have a story to share about seeing the film for the first time. I was seven in the summer of 1977, when my family – my parents and my older brother – and I went to the Varsity Theater in downtown Chapel Hill, North Carolina, to see STAR WARS.

George Lucas’ sci-fi epic had a limited release in May – the date May 25, 1977 is tattooed in the back of every geek’s brain – but it didn’t open wide and come to my hometown until July 1st.

I’m pretty sure we didn’t go to see it the weekend it opened. I have memories of seeing many TV spots for it, plus pictures in newspapers and magazines that intrigued me greatly (that was as big as the buzz got in the pre-internet era) before my Mom and Dad gave in and took us some night in July, which I think was a weeknight.

Like just about every kid, I was blown away by the movie – it was incredible looking from the first wide screen space shot to the last, really funny (I still remember the roar of laughter when R2-D2 falls face down after being zapped by a Jawa), and all around exciting, ultra fun stuff.

But, although it became my favorite movie in the years to come – collected the toys, had the posters on my bedroom walls, went as Luke Skywalker for Halloween, etc. – my first words walking out of the theater indicated a less than glowing viewpoint:

“‘King Kong’ was better.” I said this to my brother, and he has never let me forget it.

Now, it would be one thing if I meant the original, 1933 classic KING KONG, but I meant the 1976 Dino De Laurentiis remake, which had come out the previous Christmas. Now, I wouldn’t consider that film to define my childhood at all, but at the time it was my favorite of the very limited amount of movies I’d seen, and I apparently thought that STAR WARS hadn’t topped it.

Decades later, it’s been a well told story in my family with even my brother’s kids making fun of me for saying it (I join in on ridiculing my 7-year old self because, yeah, it is fun).

It feels good to confess that embarrassing moment here. I’ve come around to consider it one of my first moments of film criticism (albeit a hilariously misguided one).

So I’m glad I got my childhood STAR WARS story out the way here so it won’t clog up my review of THE FORCE AWAKENS. For sure, nobody will want to hear it there.


I’ll leave you now with this picture of a couple of iconic action figures that I dug up out of a lunchbox in my closet (a STAR WARS lunchbox, yes): 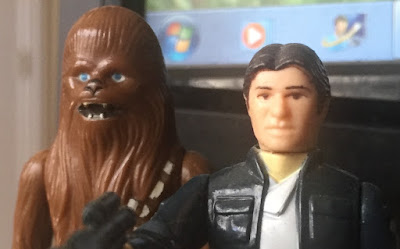