IN THE HEART OF THE SEA 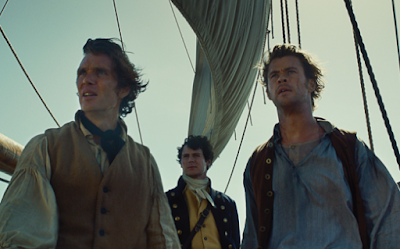 No, not really. It’s Ron Howard’s adaptation of Nathaniel Philbrick’s 2000 bestseller “In the Heart of the Sea,” about the incident that inspired Herman Melville’s 1851 classic “Moby-Dick.”

Via a framing device, Melville, played by Ben Whishaw, gets the tale how the whaling ship Essex was destroyed by a ginormous 100-foot sperm whale told to him by Bremdan Gleason as Thomas Nickerson, who had been a 14 year old cabin boy on the ship at the time.

So we flash back to the coast of Nantucket, Massachusetts in 1821, where the young Nickerson (Tom Holland) fades into the background as Chris Hemsworth (THOR) as Owen Chase and Benjamin Walker (ABRAHAM LINCOLN: VAMPIRE HUNTER) as George Pollard step forth as the stars. Hemsworth’s Chase, looking like he’s ready to pose for a romance novel cover, was promised that he’d be captain of the Essex, but the powers that be gave the job to the more refined rich boy Pollard.

Chase kisses his pregnant wife (Charlotte Riley) goodbye and the Essex sets sail on its voyage to hunt whales for oil. Tensions rise between Chase and Pollard when Chase defies the Captain’s orders in a vicious storm scene, but they agree to put their differences aside in order to achieve their chartered goal of 2,000 barrels of whale oil – a task that could take several years.

Several months into the voyage is where serious shit goes down. The whale we’ve been waiting for wreaks havoc on the ship and the crew in the central bombastic as hell action sequence, and the surviving sailors, including Chase, Pollard, Nickerson, and a few others including Cilian Murphy, looking as Willem Dafoe-ish as ever, as first mate Matthew Joy, are left with only three small open boats, and very little food or water.

As the men grow weaker so does the film. And, wouldn’t you know it, the cannibalism scene doesn’t help make the story any more compelling! Maybe it would’ve if I cared about these characters, but, even with knowing they were based on real people, the film’s mechanics made them feel like expendable cogs.

IN THE HEART OF THE SEA has a lot of bluster and bravado bursting through its frames, especially during the whaling sequences, in which there’s some mighty fine filmmaking. It’s too bad that its post production 3D conversion renders the imagery dark and murky, diluting its possible power.

That said, the film would still be problematic in 2D. Howard’s film, his 24th as director, is an attempt at a swashbuckling ocean epic that has more realism and grit than the Hollywood sea adventures of the past, but it’s so CGI saturated that its ends up having very little resemblance to reality, and as such, detachment and boredom massively set in.

It also bugs me that Nickerson and Melville never met in real life, something I didn’t know until after the movie, but still felt contrived in the film’s context. It’s TITANIC-style storytelling, and the film could’ve really done without it.

Gleeson, as the boozy, disturbed Nickerson, is likable as always, and Whishaw does his best with , but their scenes add little but some random humor to the equation.

Hemsworth and Walker’s rivalry never gets very interesting either, so what we’re left with is over-sized, over CGI-ed whaling spectacle that failed to leave much of an impression on me. From what I hear about this film’s opening grosses, I know I’m far from alone in that accessment.