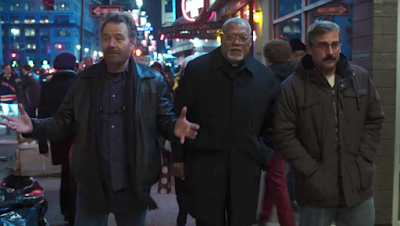 In THE LAST DETAIL, Navy lifers Buddusky and Mulhall escort court-marshaled Meadows to prison in Maine for petty theft, and take drunken detours along the way. In LAST FLAG FLYING, our trio are vets who re-unite to accompany Carrell’s Doc to the funeral of his son who was killed in Vietnam.

The film begins with Doc showing up at Sal’s dive bar in Norfolk, Virginia, after decades of non-communication, and after a night of drinking, Doc takes Sal to see their old pal, Richard, who became a Christian priest.

The film takes place in 2003, so there are running gags involving the internet and cellphones being new things, and footage of Saddam Hussein on TVs in the background.

Like its predecessor, it’s largely a road trip movie with a lot of buddy comradery, but in this story that happens after they reach their first destination – Dover Air Force Base in Delaware where they learn that Doc’s son didn’t die the heroic death that the army’s official statement reported. They then take his son’s body to bury in Portsmouth, New Hampshire, first by rented truck, then by train after a brush with homeland security with a lot of lively conversation fueling every scene.

THE LAST DETAIL was famous for having large amounts of profanity – it contained more uses of the f-bomb than any previous film when it was released in the early ‘70s – but it’s no big thing these days for a film to be filled with such dirty dialogue so it’s barely noticeable when it’s used here. Maybe that’s from my being desensitized by many viewings of Scorsese movies or frequent listens of Richard Pryor albums, I dunno.

Alongside the strong performances of the main protagonists, is an excellent supporting cast made up of Yul Vazquez as Lt Col. Willits, who tries to stop Doc, Sal, and Mueller from transporting the body themselves; J. Quinton Johnson stars as Marine Charlie Washington who breaks the news to the guys about how Doc’s son died, and especially Cicely Tyson as the grieving mother of one of their fellow Marines, who died in Vietnam.

Despite its sometimes weary depiction of distrust of the Government during the George W. Bush era, there’s a lot of warmth in LAST FLAG FLYING. Linklater handles the pathos superbly, and gets us to care about these very verbal vets. Its dialogue, co-written by Linklater and Darryl Ponicsan (who wrote the 1970 book, “The Last Detail” and its 2005 sequel that’s the basis for this film) is rich and real feeling.

Cranston stands out as the grizzled, cynical Sal – it’s one of his most fleshed out characters since Breaking Bad – Carrell’s sad sack succeeds in getting our sympathy, and Fishburne conveys dignified grace, that is except for the funny bits where his Reverend Mueller loses patience with Sal and regresses into his old profane self.

Linklater’s loving update deserves Oscar action, but more so it deserves big audiences who no doubt will appreciate its affable yet profound sensibility. LAST FLAG FLYING gets just about every last detail right. 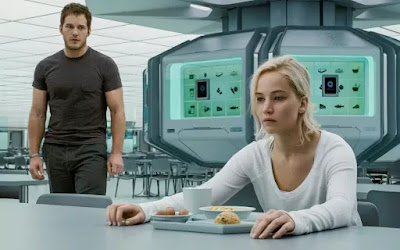