Opening today at a Marvel multiplex near us all: 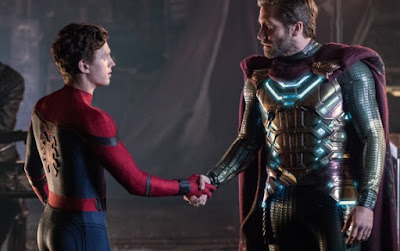 So with this sequel to SPIDER-MAN: HOMECOMING, we’re now at the end of Phase Three of the Marvel Cinematic Universe.

In what’s being called the epilogue to AVENGERS: ENDGAME, we catch up with Peter Parker/Spider-Man (Tom Holland) eight months after the events of that bloated epic.

Peter, still a high school student despite Holland being 22 when the film was shot, joins his class on a two-week summer field trip to Europe where he finds that various locations including Venice, Prague, and London are being terrorized by ginormous monsters called Elementals.

Our web-slinging protagonist is recruited by Nick Fury (Samuel L. Jackson in his third appearance in a Marvel movie this year) to fight the Elementals with the help of Mysterio, a character from the comics, portrayed by an invested Jake Gyllenhaal wearing Roman centurion-style armor.

Peter often has to sneak away from his classmates, such as the returning Zendaya as MJ (Peter’s love interest), Jacob Batalon as Ned (Peter’s best friend), and Tony Revolori, to get caught up in overblown battles in which there’s much destruction and dizzying bombast. Between these battles, there’s some frothy rom com material where Peter competes for the affection of MJ with the douche Brad (Remy Hii from CRAZY RICH ASIANS who is over 30).

These breezy bits of downtime are much more amusing and watchable than the action sequences surrounding them. It’s like a teen comedy that has to cut to big bursts of spectacle every five to ten minutes.

FAR FROM HOME is only intermittently fun, and way less satisfying than HOMECOMING as it has lost much of that film’s fresh feeling. The villain, Mysterio, isn’t fleshed out enough to make much of an impact, and the concept behind the Elementals isn’t very compelling either.

However it’s a competent summer superhero movie, and a decent entry in the franchise. I just doubt I’ll remember much of it months from now, or less. But that could be said about most of the Marvel movies. 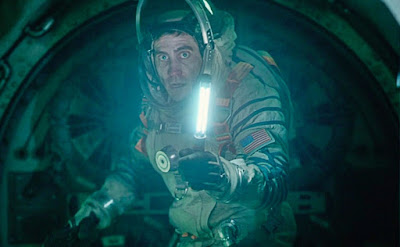