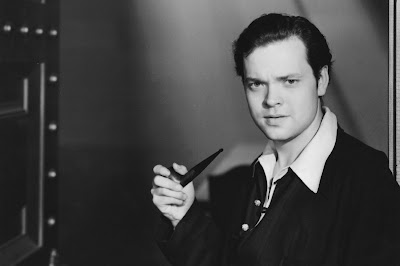 The 100th anniversary of the birth of legendary film-maker Orson Welles was half a year ago (May 6th to be exact), but here in N.C. it’s better late than never to celebrate as special showings of some of the man’s best work are hitting local screens this month.

Earlier this month The Cary Theater in downtown Cary hosted a Cinema Studies Screening of Orson Welles’ 1957 thriller TOUCH OF EVIL, presented by the Modern School of Film, and kicked off a Sunday afternoon series of November Welles screenings with the director’s 1942 adaptation of Booth Tarkington’s 1918 novel THE MAGNIFICIENT AMBERSONS.

The Sunday series continues at The Cary with Welles’ most acclaimed film, 1941’s CITIZEN KANE on the 15th at 2 pm. I previously wrote about seeing KANE at the theater last year (my first visit to the newly refurbished venue).

The following Sunday, the 22nd, the lesser known, but still essential, THE STRANGER (1946) will be featured, and the series wraps up on the 29th with Welles’ final completed film F FOR FAKE (1973). 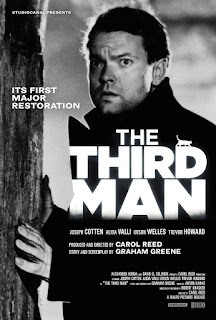 On Friday, November 13th, the Colony Theater in North Raleigh is opening the new 4k digital restoration of Carol Reed’s 1949 film-noir masterpiece THE THIRD MAN for a week long run. While Welles didn’t direct, many film buffs feel that his film-making fingerprints such as use of deep focus, long takes, and abstract angles are all over the sublime post-WW II thriller. There’s no doubt to his contribution in his writing of his own dialogue as the iconic Harry Lime character, especially when it comes to the famous “Cuckoo Clock” speech.

As the Colony Theater is sadly closing next month, it’s great that they’re showing such a classic piece of cinema as THE THIRD MAN before shutting down (The Colony will also be showing such notable films as THE PRINCESS BRIDE, THE WIZARD OF OZ, and DARK STAR in the weeks ahead, click here for more info).

I have to work this Sunday so I’ll be missing The Cary’s screening of CITIZEN KANE, but I will be attending The North Carolina Museum of Art’s showing of the film on Friday, November 20th. It’ll be my first visit to the redesigned SECU Auditorium, and I’m taking my 17-year old nephew Linus, who’s never seen it or much in black and white for that matter.

Last summer, I was talking to Linus about the Netflix superhero series Daredevil and how good Vincent D’Onofrio is as the villain Wilson Fisk, and I mentioned that D’Onofrio had played Orson Welles more than once (in Tim Burton’s ED WOOD, and in his own short film FIVE MINUTES, MR. WELLES, which you can watch here).

“Who’s Orson Welles?” Linus asked, and, well, I was a bit taken back. Still, as this happens a lot when I babbling about some old thing to kids who are completely disconnected to it, I dropped the subject.

More recently, Linus told me that he may want to study film in college – he’s not sure where he’ll go to college, mind you – and I said that he really ought to see CITIZEN KANE – it’s Film 101. 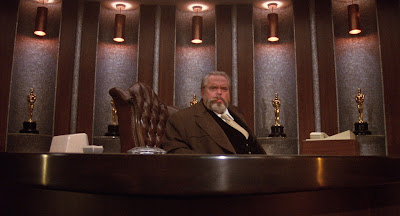 My first experience with Welles was seeing THE MUPPET MOVIE with my grandmother when I was 9, something I’ve written about before. Welles had a cameo in the film as the powerful head of a movie studio who signs up Kermit and gang to be stars (“prepare the standard ‘Rich and Famous’ contract for Kermit the Frog and Company”).

My grandmother, who is still alive, told me who Welles was – KANE, the “War of the Worlds” radio show, etc. – and the seed was planted, but it was years before I actually watched any of his work.

So now I’m attempting to pass on my Orson obsession, or, better yet, the movie-loving gene to my nephew – we’ll see how that goes. 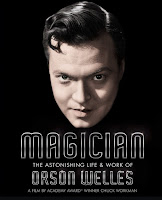 For those of you out there that are new to Welles, there is a great documentary that came out last year, Chuck Workman’s MAGICIAN: THE ASTONISHING LIFE AND WORK OF ORSON WELLES, available now on Blu ray and DVD. It gives a fairly thorough overview of Welles career in 91 minutes, and despite its overly tidy summing up of some messy material, it makes for a good introduction to the man.

Of course, it’s the words from Welles himself that are the most notable. Some choice quotes: “I’m ashamed of Rosebud, it’s a rather tawdry device – it doesn’t stand up very well, ” “You know, I always liked Hollywood very much – it just wasn’t reciprocated,” and “I would’ve sold my soul to play THE GODFATHER, but I never get those parts offered to me.”

Well, that’s enough Welles for now. Hope to see a lot of folks coming out to see these classics on the big screen in Cary and Raleigh. And, by the way, this post is part of my new “Drag a kid to KANE” initiative. Yeah, that’s right – I’m really trying to start that as “a thing.”

* I posted about actors who’ve played Welles back in 2008 as well: A Birthday Tribute To Orson Welles With 10 Welles Wannabes (5/5/08)