Now playing at an indie art house near me: 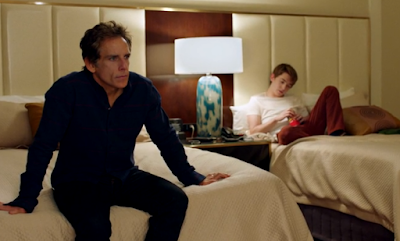 “Dad, are you having some kind of nervous breakdown or something?” asks Austin Abrams as Troy, the son of the neurotic worrywart Brad, played by Ben Stiller.

Brad denies it, but looking over the recent filmography of the 51-year old comic actor/writer/director who portrays him, it sure does seem like Stiller is fond of having his midlife crisis play out over and over again on the big screen.

It can be traced back to Stiller’s 2008 satire TROPIC THUNDER, in which he starred as airheaded action star Tugg Speedman. In a clip of an interview with Access Hollywood, Tyra Banks puts it to Speedman: “You’re on the wrong side of 40. You’re childless and alone. Somebody close to you said, ‘One more flop and it’s over.’” Stiller’s Speedman responds, “Somebody said they were close to me?”

But the crisis really began in earnest with Noah Baumbach’s GREENBERG (2010). Stiller played the title role, a miserable misanthrope who sabotages every potential relationship with his miserable misanthropy after suffering, yep, a nervous breakdown.

After some forgettable commercial comedies – THE WATCH, TOWER HEIST, THE SECRET LIFE OF WALTER MITTY – Stiller teamed up with Baumbach again for a much more successful look at the neuroses around aging: 2015’s WHILE WE’RE YOUNG. In it Stiller plays yet another New Yorker, a documentary filmmaker who, with his wife played by Naomi Watts, befriends a young hipster couple (Adam Driver and Amanda Seyfried) because he longs to be young and hip again.

Even Stiller’s ZOOLANDER 2 from earlier this year touched on this theme with Stiller’s Derek Zoolander and Owen Wilson’s Hansel being tricked into wearing garish red jumpsuits that say “Old” and “Lame.”

So that brings us to Mike White’s BRAD’S STATUS, which features Stiller as a guy who is tormented by thoughts of being a failure while on a trip to visit prospective colleges in the Boston area with his son, the aforementioned Abrams. Brad runs a non-profit in Sacramento, has a lovely wife played by Jenna Fischer, and a 19-year old son who could possibly get into Harvard, but he can’t help thinking about his college buddies who are all much bigger successes than him.

Brad feels not just “fleeting jealousy, but real pain” when he sees his old pal Craig Fisher, played with supreme smarm by Michael Sheen, on TV as a political pundit/ bestselling author. He feels the same about seeing that his former friend, a bigtime movie director played by the film’s writer/director White, has his house in Architectual Digest, and hearing that another buddy portrayed by Owen Wilson, is a extremely wealthy business man with his own jet. Oh, yeah, there’s also Jermaine Clement as a retired internet mogul who lives in Hawaii with two young girlfriends.

So comparatively, Brad feels he’s got nothing to show for his life of hard work, and that there’s no potential there for anything better, but learning that his son has a shot at Harvard may yet be the light at the end of the tunnel.

Abrams’ Troy is weirded out by his Dad’s behavior, but deals with it admirably. They go out to dinner with musician friends of Troy’s played by Shazi Raja and Luisa Lee, and Brad is smitten with these young ladies while cynical about their idealism, which he believes will fade like his has.

While Brad only speaks on the phone with his friends played by Clement, and Wilson, he meets Sheen’s Craig Fisher for a meal, but it doesn’t go well. In fact, after the Roger Moore-athon impression dueling in THE TRIP TO SPAIN, it’s the most cringe-worthy scene in an independent film this year.

BRAD’S STATUS is funny, but not laugh out loud funny, it’s more inner squirm funny. Stiller’s Brad has fantasies throughout the film about his friend’s charmed lives, and they are among the film’s most amusing moments, but the movie is best when it makes us nod and relate with Brad’s reckoning with his relevance. This comes in the form of Stiller’s voice-over narration, a device that is often overused, but White’s writing which within them takes on various relatable rationales and dark avenues of thinking, is pleasurably on point.

A thoughtful and witty indie that while it dances on the edge of being a downer, BRAD’S STATUS has as much of a hopeful gleam in its eye as its protagonist does when he cries at a climatic classical concert involving Raja playing flute to the accompaniment of Lee on violin. It’s a scene that’s as squirm-inducing as it is moving, but by that point in the film, you’ll be used to that.