Now playing at a multiplex near everyone: 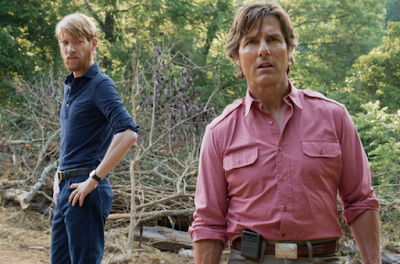 Let’s be honest – this movie has been made many times before. It’s the GOODFELLAS model of a cocky guy who does corrupt things to get the good life, while his wife on the side initially disapproves, but then is wooed by all the money coming in. This all, of course, ends badly, but not before some flashy montages stuffed with sex, drugs, and rock and roll, and some comical scrapes with the law.

AMERICAN MADE’s subject Barry Seal, buoyantly played by Tom Cruise, has even been portrayed five times before – mostly on the small screen by Dennis Hopper in the TV movie DOUBLECROSSED, by Theddeas Phillips in an episode of the Spanish language series Alias el Mexicano, by Dylan Bruno in an episode of Narcos, and by David Semark in the mini-series America’s War on Drugs.

So yeah, Seal’s story has been touched on just a little bit.

We meet Seal here as a bored TWA pilot in the late ‘70s who is recruited by a smooth, scene-stealing Domhnall Gleeson (EX MACHINA, THE REVENANT, STAR WARS: THE FORCE AWAKENS), as CIA operative Monty Schafer, to fly reconnaissance missions in Central America to collect counter-intelligence. Since when he tells his wife Lucy (Sarah Wright) the name of the company he’s been offered to work for is called IAC, which stands for “Independent Aviation Consultants,” she says “that sounds fuckin’ made up,” he keeps his new job secret from her.

On one of his missions he is approached in Panama by the Medellín Cartel, made up of Jorge Ochoa (Alejandro Edda) and Carlos Lehder (Fredy Yate Escobar) and Pablo Escobar (Mauricio Mejía), to smuggle cocaine for them from Columbia to Louisiana. This results in one of the film’s most thrilling sequences in which Cruise, who did much of his own flying stuntwork (of course he did), has trouble clearing a short jungle runway and almost crashes into the trees.

Seal gets into running guns for the Contras and is given his own remote airport in Mena Arkansas, where he hires several pilots to help him on his many missions. There’s always got to be a slimy character that may screw up things for the wheeling and dealing lead and it comes in the form of Lucy’s brother JB (Caleb Landry Jones).

SP Seal has to contend with that along with the DEA, CIA, the Contras, the Sandinistas, and the Reagan White House, where we get cameos by Oliver North (Robert Farrior), and George W. Bush (Connor Trinneer).

While AMERICAN MADE, written by second-time screenwriter Gary Spinelli (the little-seen STASH HOUSE was his first), recalls the formula of the aforementioned GOODFELLAS, and covers the same ground that the also aforementioned THE INFILTRATOR, SICARIO, WAR DOGS, SAVAGES, and especially BLOW did, it’s an enjoyable romp that features Cruise’s most invested acting in ages (take that, THE MUMMY!).

Cruise delightfully puts a cynical spin on his TOP GUN persona of old, and carries the movie with his charm even when he’s mostly confused about how in over his head he is.

It may be an overly familiar ride that plays fast and loose with the facts, but it entertains for most of its running time, and it’s commendable that it doesn’t ape the Scorsesean style as extreme as AMERICAN HUSTLE did.

Though not as good as their previous film, EDGE OF TOMORROW, this film has director Liman and Cruise appearing to work well together, which bodes well for their proposed sequel to EDGE. Maybe that one will have a better, less generic title than their first two efforts.