Now playing in the Triangle area:


MARK FELT: THE MAN WHO BROUGHT DOWN THE WHITE HOUSE (Dir. Peter Landesman, 2017) 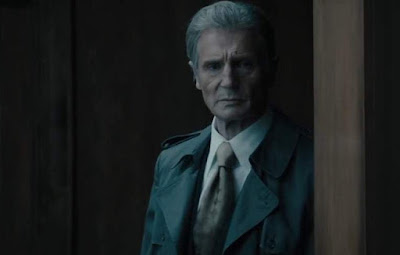 In 2005, former FBI agent Mark Felt revealed that he was the confidential source, Woodward confirmed it, and decades of speculation in which folks suspected White House counsel John Dean, chief of staff Alexander Haig, speechwriter Pat Buchanan, and even White House press aide/later broadcast journalist Diane Sawyer to be possible candidates were over.

Now Felt’s story is told in this film based on the books, “A G-Man’s Life: The FBI, Being Deep Throat, and the “Struggle for Honor in Washington” by Felt and John O’Connor, that’s can be seen as ALL THE PRESIDENT’S MEN told from the point of view of, well, one of the President’s men although one that doesn’t work for the President directly. A grim, stoic Liam Neeson plays Felt, who more than once is referred to as a G-Man’s G-Man.

The film opens on April 11, 1972, 203 days before the election for Richard M. Nixon’s second term, with Felt meeting with Dean (Michael C. Hall) and letting him know that his boss, J. Edgar Hoover, has files full of damaging secrets on everyone in power. “We’re the FBI,” Felt says chillingly. “All your secrets are safe with us.”

However, after Hoover dies, Felt is passed over by Nixon for the job of FBI director, with one of the President’s shady yes-men, L. Patrick Gray portrayed by Martin Csokas, getting the prime position.

Gray attempts to squash Felt’s investigation of the Watergate break-in in June of ‘72, which if you don’t know your history, involved five men getting arrested for breaking into the Democratic National Committee headquarters at the Watergate, an office/apartment/hotel complex in Washington, D.C. The burglars were found to have ties to the CIA and later the White House, which led to the toppling of Nixon’s Presidency.

But I’m getting ahead of myself. It’s hard not to do as MARK FELT takes its time getting to the juicy stuff such as the famous parking garage meetings with Woodward (Julian Morris), because Landesman’s screenplay wants us to see what a solid, uncompromised government official Felt is. We learn that he and his wife, Audrey (an underused Diane Lane), are worried sick about their missing daughter who’s run off to join the counterculture or something (it was the ‘70s), but Felt is so by the book that he won’t use the power of the FBI to find her.

Neeson’s nuanced, grim performance as Felt is among his finest work, but the movie keeps trying to build up dramatic heft but never quite gets there. Daniel Pemberton’s overly pulsating score doesn’t help as it dominates too many scenes, and tries too hard to make everything more ominous. They should’ve learned from the minimalist soundtrack for ALL THE PRESIDENT’S MEN to use those edgy strains sparingly.

There’s also too many House of Cards-ish aerial shots of D.C. framed to make the town look evil, and the whole interior look of the film is dark blues and greys with Oliver Stone-style mood lighting. We get it – the Nixon era was dark and gloomy. Much like ALL THE PRESIDENT’S MEN (sorry, I can’t help bringing that movie up over and over), Nixon is only seen in archival footage on background TVs, but dammit if his sinister presence isn’t all over this tense, but sadly not too thrilling thriller.


As there are striking similarities with the situations surrounding our current President whose name I hate typing with the leaks, the cover-ups, the dishonesty etc. this tale couldn’t be more relevant, but this dry run through the facts doesn’t have enough narrative drive to make it essential viewing.

Felt is described in the film’s postscript as “one of the most impactful whistleblowers in American History,” but his portrait here lacks impact. The story of the Watergate scandal was, of course, so much better told in that 1976 movie I keep referring to because this film could never shake it out of my mind.

In other words, Neeson is fine as Felt, and, sure I’d rather see him in something like this instead of another TAKEN movie, but Deep Throat will always be Hal Holbrook to me.