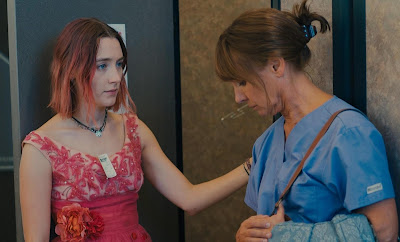 Not so long ago, Greta Gerwig was the indie film “it” girl. She acted in films made by the Duplass brothers (BAGHEAD), Woody Allen (TO ROME WITH LOVE), and her long-time boyfriend Noah Baumbach (GREENBERG, FRANCES HA, MISTRESS AMERICA). She even brushed up against the mainstream with her appearance in the awful ARTHUR remake with Russell Brand.

But now Gerwig tries her luck behind the camera for her directorial debut, LADY BIRD, which she also scripted.

No, it’s not about the wife of President Lyndon B. Johnson who had that nickname, it’s about a 17-year old Sacramento high school senior with dyed red hair played by Saoirse Ronan (ATONEMENT, HANNA, BROOKLYN), whose parents gave her the name Christine, but she goes by “Lady Bird” and insists that everyone calls her that.

Lady Bird’s tense relationship with her mother, superbly played by Laurie Metcalf ( I don’t need to list her credits, do I?) is the crux of this movie which is set in 2002, when Gerwig was around the same age as its protagonist. That makes one assume that it’s autobiographical, but Gerwig claims that while she was born and raised in Sacramento, and went to an all-girls Catholic school there, the film is only loosely based on her life as many of the situations depicted didn’t happen to her.

We are introduced to Lady Bird and her mom, Marion, as they are returning home from touring a prospective in-state college, and we get a taste of what their emotionally strained life together is like.

While driving home, Marion lectures about where she and her husband Larry (a laid-back Tracy Letts) can afford to send Lady Bird, while our titular character says she wants to go where culture is like New York which makes Marion label her a snob. When her mother goes on a tirade about how her daughter “should just go to city college, then to jail, and then back to city college,” Lady Bird reacts by opening the door of the car and jumping out.

With a cast on her right arm on which she wrote “F*** You Mom,” Lady Bird signs up for drama club auditions at her High School, Immaculate Heart, with her friend Julie (Beanie Feldstein), and gets cast in a musical production. During rehearsals, Lady Birdstarts crushing on one of her fellow cast members, Danny played by Lucas Hedges (MANCHESTER BY THE SEA, and the currently playing THREE BILLBOARDS OUTSIDE OF EBBING, MISSOURI).

The couple date, but the courtship is cut short when Lady Bird catches Danny kissing another guy in a restroom stall. So then our heroine has eyes for Kyle (Timothée Chalamet), a snooty, oh-so-deep musician who likes to say “that’s hella tight.”

Lady Bird loses her virginity to Kyle, but is saddened to find out that it wasn’t his first time. Moving on, after getting some rejections to schools she’s applied to, Lady Bird gets on a wait list for a university in New York, but keeps it secret from her mother.

On the sidelines of Lady Bird’s love life, is Jordan Rodrigues as her adopted brother, Miguel; Marielle Scott as his live-in girlfriend, Shelly Yuhan; Odeya Rush as the popular, pretty Jenna, who Lady Bird befriends to her BFF Julie’s chagrin; and Lois Smith, who has a few nice, warm moments as Sister Sarah Joan, the principal of our leading lady’s high school.

Because of its down to earth depiction of a hip artistically inclined young woman, who describes herself as being from the “wrong side of the tracks” going through the motions like going to a drunken party at someone’s rich parents’ house, and the politics of who goes with who to the prom, the film recalls the 1986 John Hughes teen classic PRETTY IN PINK and from what I’ve heard that’s on purpose (According to a Vanity Fair interview with Ronan, Gerwig pointed her towards that film, and Hughes’ SIXTEEN CANDLES before shooting).

LADY BIRD is a coming of age drama that doesn’t break any new ground but its low key tale of a young woman entering a new phase in her life is unpretentiously told by Gerwig, who appealingly doesn’t have her characters making snarky one-liners – consider her the anti-Diablo Cody, and this the antithesis of JUNO. Our  writer/director also brings out great naturalistic performances by Ronan and Metcalf that are both deserving of Oscar nominations.

It’s a directorial debut with a difference, the difference being that it has a lot more artistic depth that I expected from Gerwig, whose onscreen presence as an actress can be a bit goofy, quirky, and often way flakey.

Gerwig makes good choices when it comes to the film’s soundtrack as well, from Jon Brion’s subtle score to the Sondheim show-tunes that Ronan and Ledges sing, to the perfect-for-period snippets of Alanis Morrisette and Justin Timberlake. She even somehow makes the Dave Matthews Band’s “Crash into Me” actually resonate and effectively evoke heartbreak in two different scenes. No small feat that.