Opening in your star system tonight: 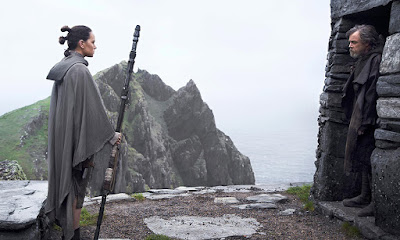 Warning: There may be Spoilers!

At the end of the previous Episode of STAR WARS, Stormtrooper turned Resistance (the new version of the Rebel Alliance) fighter Finn (John Boyega) was left injured and unconscious after helping to destroy the First Order’s (the new Empire) Starkiller Base (another Death Star), General Leia Organa (the late Carrie Fisher), Chewbacca (Peter Mayhew) and the rest of the good guys were mourning the death of Han Solo (Harrison Ford); while newly recruited Resistance fighter Rey (Daisy Ridley) had traveled to the planet Ahch-To to find Luke Skywalker (Mark Hamil) so that he can help bring down the bad guys.


The last shot of FORCE AWAKENS has an emotional Rey handing an old grizzled Luke his old iconic lightsaber.


So now, after two years we get Luke’s reaction to Rey’s gesture, and it doesn’t disappoint. Neither does the rest of THE LAST JEDI, the solid seventh entry in the series that satisfyingly follows through with the threads of the former film, while providing a steady stream of call backs to the original trilogy (Episodes IV-VI) that should please both the casual and hardcore fans.

The most obvious prediction about the content of THE LAST JEDI is that it’ll mirror Episode V: THE EMPIRE STRIKES BACK as much as THE FORCE AWAKENS mirrored the first STAR WARS movie (still not calling it A NEW HOPE, dammit!).

Well, yeah, there are definite parallels – Luke channeling Yoda in training Rey to the ways of the force, Yoda himself appearing (welcome back, Frank Oz!), the reveal of a character’s lineage, and those much loved AT-AT walkers – but it has enough clever story beats and tongue-in-cheek humor needed to make those elements feel fresh.

The plot deals with the First Order achieving more power in their fight against the Resistance via being able to track their movement through hyperspace. General Leia gets harmed in an attack, and while she’s incapacitated, Laura Dern as Vice Admiral Amilyn Holdo takes control to the chagrin of Poe Dameron (a cocky, returning Oscar Isaac) who’s called a “flyboy” twice by Amilyn.

Finn finds a friend in fellow Resistance member Rose Tico (Kelly Marie Tran), who catches him trying to run away like he was planning to in Episode VII. Together they travel to a planet that has a Monte Carlo-style gambling resort to find a code breaker, but end up with the somewhat shady Benicio del Toro as an unnamed character with an odd speech impediment.

As for the rest – you know the drill: space battles, lightsaber duels, and the powerful pull of the dark side of the force fill the screen as John Williams’ triumphant score bursts out of the sound system.

THE LAST JEDI has more depth, darkness, and drama than THE FORCE AWAKENS. It’s a blast, even in its talky downtime, and it makes great use of its game cast.

Hamill gets his beefiest role since RETURN OF THE JEDI, and it’s his best performance (yes, I’ve seen CORVETTE SUMMER). Ridley and Boyega make more of an impression that their first efforts, while Driver steals the show every time he appears.

However, there are a few issues. There is no backstory to the Emperor figure that is Snoke, and the reveal of who Rey’s parents are feels like an afterthought. Also, C3PO’s red arm in the previous movie is never explained (I hear there’s a comic that tells what happened there but I doubt I’ll ever read that).

Director and writer Johnson (BRICK, THE BROTHERS BLOOM, LOOPER) molds his style successfully into the series, and doesn’t need as many wipe transitions to move the pace along, something that J.J. Abrams overdid.

As for it being Fisher’s swan song (I think, but maybe they’ve got some footage of her that will be used in the next one), it’s touching to see her Leia in a more substantial role than in Episode VII. They take a big chance with her image in a surreal scene that I won’t spoil – I’ll just say that it works.

Glad to see that STAR WARS continues to be back on track again as the stench of George Lucas’s awful prequels has long since faded, and the good will of the galaxy far, far away has been regained.

I’ve seen that many critics are calling it the best since EMPIRE, and I don’t disagree. Maybe the nostalgia that the member berries have triggered has blinded my judgement, but I’m happy that the franchise that dominated my childhood is yet again going good guns (or blasters).