Now playing at a art house theater near me: 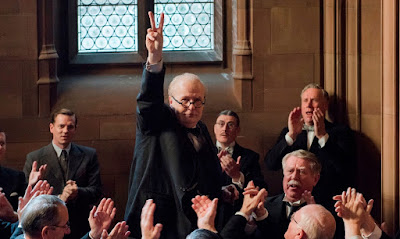 In the case of acclaimed performances in which a famous actor plays a famous historical figure – say, Daniel Day Lewis as Lincoln, or Jamie Foxx as Ray Charles, or Ben Kinglsey as Gandhi, Meryl Streep as anybody, etc. – it’s become a cliché to say things like that they “disappeared into the role,” or “at times I forgot who it was and thought I was watching the real person.”

But with Gary Oldman’s tour de force portrayal of Winston Churchill in Joe Wright’s second World War II-themed film, DARKEST HOUR (the first was ATTONEMENT), he really does completely disappear into the role, and I really did forget at times that it was him and thought I was watching Churchill.

Set in 1940 at the height of WWII, when Britain was on the verge of being invaded by Nazis, the film depicts Churchill’s intense first month as Prime Minister of the United Kingdom.

Much of the film is seen through the eyes of Churchill’s personal secretary, Elizabeth Layton (played by Lily James best known for Downton Abbey and BABY DRIVER), as she begins to work for him shortly into the film.

Churchill assumes his role by meeting with King George VI (Ben Mendelsohn, not stammering as much as Colin Firth did in the same part in THE KING’S SPEECH), assembling his War Cabinet which includes his predecessor Neville Chamberlain (Ronald Pickup) and Foreign Secretary Lord Halifax (Stephen Dillane), and making a big speech to Parliament in which he famously declared that they should “wage war against a monstrous tyranny never surpassed in the dark and lamentable catalogue of human crime.”

Churchill’s refusal to talk peace with Hitler angers Halifax and Chamberlain, who want him replaced. Churchill remains adamant that they stand their ground against negotiations, and we get a different angle on the same story that Christopher Nolan’s brilliant DUNKIRK told earlier this year (Wright also memorably touched on the Dunkirk situation

in a pretty stunning five-minute tracking shot in ATONEMENT).

The look of the film, shot by cinematographer Bruno Delbonnel (INSIDE LLEWYN DAVIS) is so grey and grim that one wonders if they considered making it in black and white. So many scenes are set in pitch darkness in cramped rooms with what spare lighting there is glowing in an Oliver Stone-ish fashion.

The tropes of period piece historical drama are unavoidable at times but Oldman’s Churchill is such a delicious characterization that I was very forgiving of some unnecessary stylish touches – like the two shots taken from above that zoom backwards into CGI-imagery depicting the dark of fire world below.

I’ll be shocked, shocked I tells ya, if Oldman doesn’t get an Oscar nomination, and then the award itself as he’s so delightfully dead on here. For this guy, who’s one of the best actors working today, to have pulled off such beyond convincing interpretations of such diverse personalities as Sid Vicious, Lee Harvey Oswald, Beethoven and now this is well worth awarding as it for sure is the most striking acting I’ve seen this year.

The supporting cast glows (literally) surrounding Oldman as Kristen Scott Thomas as Mrs. Winston Churchill, Clementine, makes the most of her worrying-wife-back-home archetype with some warm moments, Mendelsohn’s King George VI has a weary yet hopeful air about him, and James helps bring some light to the dark sets especially in an aside where she tells her boss that he’s doing the V for Victory sign the wrong way.

Anthony McCarten contributes a much sharper screenplay than his previous Oscar winner for that category, THE THEORY OF EVERYTHING, and the score, by Dario Marianelli whose worked with Wright on nearly every film he’s made, is nicely understated.


But again, it’s Oldman who makes this an essential film to see this season. His performance may be a lot to take for some moviegoers as he dominates nearly every talky as hell moment, ranting as times in his trembling accent always with a glass of brandy or scotch in his hand and a long cigar sticking out of his mouth, but for me the experience is as sublime as the way the words that the real person put together rang out.

Sure, with WWII and the tried and true Greatest Generation spirit that panders to the elder voters, it’s a prime piece of Oscar-bait, but, for a considerable amount of its running time, DARKEST HOUR mightily transcends that.