Now playing at more multiplexes than art houses in my area:

THE SHAPE OF WATER 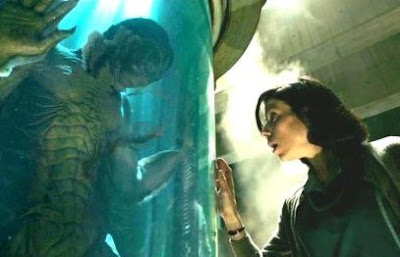 When Guillermo del Toro turned down the chance to remake (or reboot) the CREATURE FROM THE BLACK LAGOON for Universal’s “Dark Universe” series he definitely made the right decision.

And that’s not just because the pending franchise has gotten off to a very shaky start with last summer’s THE MUMMY flop, and is in danger of being scrapped altogether, but because there’s no way he would’ve been able to build upon the concept to make such a beautifully bizarre love story thriller as THE SHAPE OF WATER under a big studio banner.

Del Toro, co-writing with Vanessa Taylor, infringes on no copyrights here, as the amphibian man here is never referred to as “Gill-man,” but it uses the basics as obvious jumping off points for the premise of “what if the creature got the girl?”

Set in 1962 Baltimore, the film is told from the point of view of Sally Hawkins as Elisa, a mute cleaning lady who works the night shift at a secret government laboratory. We get a look into Elisa’s lonely world up front as we see her eat pie with her neighbor Giles (Richard Jenkins), a depressed, closeted artist who loves watching old musicals on TV. Elisa and Giles live in rundown apartments above a movie palace theater, so del Toro works in his love for cinema there too.

At Elisa’s work, where she converses in sign language with her co-worker Zelda (Octavia Spencer, again playing the help), she learns that a aquatic creature is being held in a huge metal water tank at the facility, and that it’s being tortured by Colonel Richard Strickland (a deliciously creepy Michael Shannon) who captured it in South America.

Elisa makes friends with the amphibian man (played by actor / contortionist Doug Jones) by feeding it hard boiled eggs, and teaching him how to sign, and a romance forms. When she finds out that they’re going to dissect him, over protest by scientist Robert Hoffstetler (Michael Stuhlbarg), she plots to help him escape.

The escape sequence, among other elements, gave me flashbacks to Ron Howard’s 1984 rom com SPLASH, which had Tom Hanks falling for Daryl Hannah as a mermaid who he rescues from a secret lab, but that did nothing to hinder the spell this film so sweetly casts.

Back at Elisa’s apartment where the fish guy mostly stays in a bathtub filled with salt and some chemicals that Hoffstetler gave her, they consummate their relationship. While the movie contains much grotesque imagery concerning such things as Strickland’s bitten off fingers, and a cat being eaten, the love scenes are as tasteful and touching as scenes between amphibians and humans can possibly be.

You just may need to suspend disbelief considering such premises like that by putting towels under the door you can fill the bathroom of a crumbling apartment completely to the ceiling with water, but if you can do that you’re in for some visual treats courtesy of cinematographer Dan Laustsen.

Without speaking, Hawkins puts in a wonderfully communicative performance that shows fluid chemistry with Jones’ creature, and has a great moment standing up to Shannon’s evil Strickland.

She is a large part of what makes the small, dark off-kilter fantasy THE SHAPE OF WATER del Toro’s most emotionally affecting work yet.

Maybe this means that more established filmmakers should turn down franchise work to go off on their own to make movies inspired by concepts they wouldn’t be allowed to do in those big studio entries. I mean, it sure worked for del Toro.