Now playing at an indie art house theater near me (and you probably): 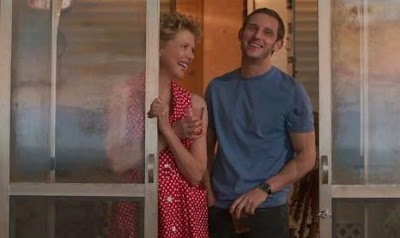 “Always played the tart – big name in black and white films, not doing so well in color though, obviously,” says a Cockney landlady about her new tenant, actress Gloria Grahame, early on in this adaptation of Peter Turner’s memoir about his relationship with the fading silver screen star.

She’s right, Grahame flourished during the golden age of cinema in such movies as IT’S A WONDERFUL LIFE, THE BIG HEAT, THE GREATEST SHOW ON EARTH, and even won an Oscar for THE BAD AND THE BEAUTIFUL, but the pictures got bigger and she got smaller.

That’s a spin on what the washed-up former silent movie queen, Norma Desmond (Gloria Swanson), famously said in the Billy Wilder classic SUNSET BOULEVARD, and it shows an acute self awareness that Grahame, portrayed beautifully by Annette Bening, references that movie upon first hitting it off with Turner (Jamie Bell).

Turner, an actor 30 years younger than Grahame, falls hard for her maybe around the time that they disco dance together to Taste of Honey’s “Boogie Oogie Oogie.”

FILM STARS begins in 1981 with Turner tending to an ill bed-ridden Grahame, but swiftly flashes back to 1979 and plays on touching upon Grahame’s well received performance in “Rain” at the Watford Palace Theatre, trips the couple take to Los Angeles and New York, and various high and low points in their May-December romance.

Bening is usually right on the money in her many stellar performances, and she is again here, once you get past her character’s Marilyn Monroe-ish preciousness which comes on a bit cutesy at first but ends up feeling absolutely authentic.

Bell, best known for his child star turn in Stephen Daldry’s BILLY ELLIOT (2000), doesn’t have the most believable chemistry with Bening, but still is effective in conveying Turner’s initial smittenness, and later frustration when the relationship starts falling apart.

McGuigan, a Scotsman filmmaker (LUCKY NUMBER SLEVIN, PUSH, and episodes of Scandal, Sherlock, and Smash), does his best with Matt Greenhalgh’s screenplay, but the story is fairly spare and many story beats can be felt well before they hit. It’s really a film that you see for the strong performance of Bening, its tender mood, and its overall sentiment than for its narrative. And the sentiment is captured gorgeously by Elvis Costello

’s “You Shouldn’t Look At Me That Way” which he wrote for the film, and which plays over the ending credits.

But, of course, it’s Bening who owns FILM STARS with the way she embodies Grahame’s glamour and relishes her romantic visions of old Hollywood. When Grahame tells Turner a bit of advice that Humphrey Bogart once gave her, “Keep it in the shadows, Gloria. Let the camera come to you,” one can get in that moment that Bening herself has lived that line throughout her career.