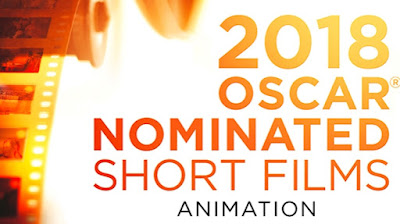 Death, fairy tales, bullying, a player’s love of his game, and frogs are the subjects of this year’s group of Oscar-nominated animated shorts which are playing at various theaters near me alongside programs of the likewise nominated Live Action and Documentary shorts.

The 90th Academy Awards® will be broadcast live on March 4th, so there’s plenty of time to catch up with these short films, and good reason too as they’re a pretty pleasing batch.

The first animated short, Glen Keane and Kobe Bryant’s DEAR BASKETBALL, is Bryant’s love letter to his sport, based on a letter he wrote to The Players’ Tribune in 2015 announcing his retirement. 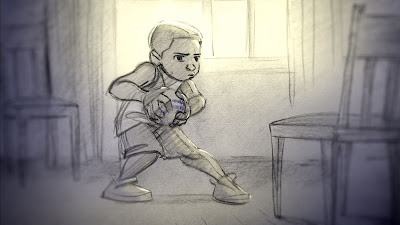 Bryant is depicted in sketchy hand-drawn animation from when he was a child shooting imaginary game-winning shots with rolled-up tube socks in his bedroom, to imagery of him making his famous moves that won five NBA championships with the Lakers as an adult.

It’s a swift and fluid five minute film, but it feels like a commercial or beginning of a feature length documentary. It’s no doubt a sincere, and well-intentioned ode, but it still struck me as self-promotion and I wasn’t moved by it that like I bet somebody who’s a fan or into basketball would be. 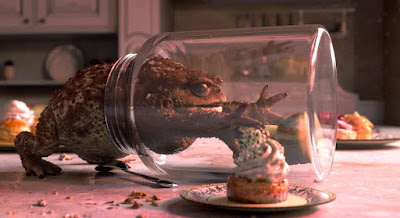 That’s right, it was made by six French 3D artists, who dub themselves Illogic Collective, during their studies at MoPA, animation school in France.

The seven minute movie concerns a group of amphibians exploring the immaculately detailed grounds and interiors of a mysteriously abandoned mansion. The frogs and toads swim in the pool, feast on rotten food, and inadvertently turn on the house’s lights, stereo system, and outside sprinklers by jumping on the buttons of a control panel. The photo realism is stunning, so much so that the visuals border on the grotesque especially when we find out what happened to the estate’s former resident.

These students’ production definitely deserves to win, but I’m thinking that because of its dark undertone it’ll probably be passed over.

Every year, Pixar has a short in competition and Dave Mullins and Dana Murray’s LOU, about a schoolyard bully being taught a lesson by the contents of a lost and found box, is their entry this time around. 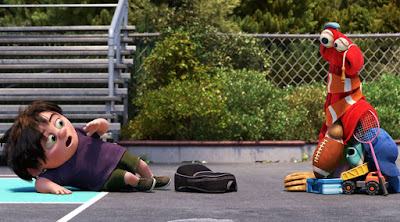 In a colorful animation style that should be well familiar to anyone who’s seen any of the Disney subsidiary’s movies, the film tells the story of a mean kid who steals his classmates belongings – such as a red hoodie, a couple of baseballs, a football, a piggy doll, a pitcher’s mitt, an orange and white scarf, a slinky, a toy truck, a jump rope, a book, a shoe, a lunch box, a hat and a tennis racket.

I listed all of those items because they come together to form an anthropomorphic character with the baseballs as its eyes. After a hilarious scuffle, the bully is punished by having to return all the things he stole, and is redeemed just as you thought he would be. LOU, which originally ran before showings of CARS 3, is a predictably pleasing six-minute piece of fast paced Pixar fun, but since they won last year with the charming PIPER, I doubt this is their year.

The following short, Max Porter and Ru Kuwahata’s NEGATIVE SPACE also concerns the assorted contents of a box, but this time it’s a suitcase and it’s about a father teaching his son how to properly pack it for a trip. 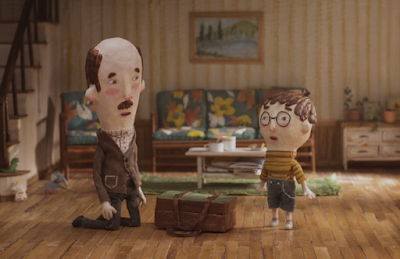 The French film is an adaptation of a poem by Ron Koertge via a neat-looking stop motion world of models and miniatures. It’s a charmer with a touchingly witty conclusion, and, funnily enough, it’s the second short of the bunch that animates the rolling up of socks (DEAR BASKETBALL is the other). I can totally see this one winning.

At 28 minutes in length, Jakob Schuh and Jan Lachauer’s REVOLTING RHYMES is the longest of the animated shorts. It is an adaptation of a 1982 Roald Dahl book of poems satirizing six famous fairy tales that’s narrated by The Wire’s Dominic West as the big, bad Wolf. 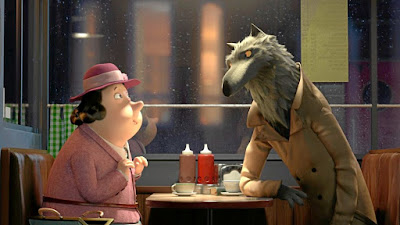 The Wolf tells his story to a kindly woman in a café about Red Riding Hood and a blonde Snow White meeting at the funeral for Snow White’s mother. We learn that Red Riding Hood keeps her money in a bank made out of many piggy banks run by one of the three little pigs, and that Snow White’s father, the King (voiced by Rob Brydon of those TRIP movies with Steve Coogan) marries a crude woman, Miss Maclahose, who has a magic talking mirror for the “who’s the fairest” bit. The seven dwarfs appear as ex-horse race jockeys, who ask the mirror which horse to bet on as Snow White pines for her Prince, and so on.

Dahl’s dark spin on these familiar stories is illustrated by computer animation that at times resembles the work of Aardman Animations (Wallace & Gromit) despite not involving clay. The rhymes aren’t really revolting, but there are some grim fates for some of the characters. As the film feels a bit stiff, it may be my least favorite of the animated shorts, but the British-German production just may tickle enough Academy voters to get it the gold.

Since four of the five films run around five to seven minutes, there are three bonus shorts to pad out the Animated Shorts package to feature length: Kevin Hudson’s WEEDS, Daniel Agdag’s LOST PROPERTY OFFICE, and Lucas Boutrot, Élise Carret, Maoris Creantor, Pierre Hubert, Camille Lacroix, and Charlotte Perroux’s ACHOO! I ‘m not going to go into any detail about these “commended” shorts, but I will say that ACHOO! about a sneezing Chinese dragon who invents fireworks is my favorite of them.

If you haven’t already check out my reviews of the Oscar® Nominated Live Action Shorts.