These two films, now playing at a indie art house near me, lost their respective categories at the Oscars last Sunday, but that doesn’t mean they aren’t worth your time: 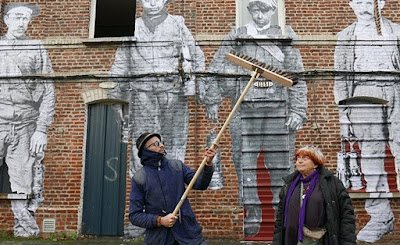 This lovely film, which is nominated for the Best Documentary Oscar this year, could have been titled FACES ON PLACES as it concerns a couple of artists pasting large pictures of faces on buildings. The artists, Belgian filmmaker Agnès Varda and French street artist JR, don’t only do faces as they paste huge pictures of fish on a water tank at one point, but it’s mostly the faces of local villagers, farmers, and other various folks they meet on their journey that they photograph, reproduce in large prints and affix to the side of what they deem appropriate structures.

Agnès Varda and JR are shown traveling across the French country side to brighten up farms, ruins of old houses, and most stunningly a concrete German blockhouse from World War II, on the Normandy coast, in Saint-Aubin-Sur-Mer. 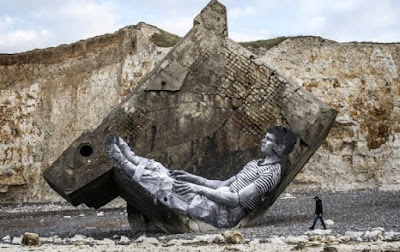 Varda and JR’s film is loose and rambling at times, but never boring as its filled with such vivid eye candy. Throughout their pasting adventures, Varda tries in vain to get JR to take off his sunglasses. His refusal to not be seen without them reminds her of her old New Wave filmmaking friend Jean-Luc Godard, whose house they make their way to at the movie’s conclusion.

The warmth the unlikely duo of Varda and JR exude is felt in every frame, though it’s easy to see why FACES PLACES didn’t get enough votes to win last Sunday as it could be seen as fluffy compared to its more serious competition. Its lightness shouldn

’t be mistaken for insubstantiality though as it carries a lot of weight, as well as considerable charm, but, most importantly, it’s a visual treat through and through. 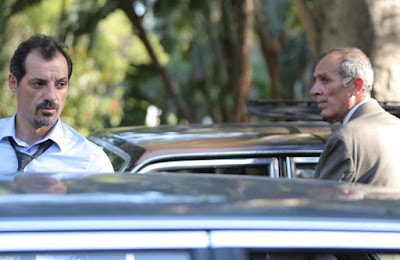 There’s no way this film, the sixth feature by Lebanese-born filmmaker Zias Doueiri (THE ATTACK), had much of a chance up against the power of Sebastián Lelio’s A FANTASTIC WOMAN for the prize of Best Foreign Film at this year’s Oscars, but it still is well worth moviegoers’ attention.


The film concerns a crude incident between a Lebanese Christian and a Palestinian refugee that escalates into a national threat. It begins with a Beirut street scene in which construction crew worker Yasser (Kamel El Basha) asks Tony (Adel Karam) a tenant of a building they’re working on, if they can fix the drainpipe illegally sticking out of his apartment balcony. When the Palestinians-hating Tony refuses Yasser and his men’s entry into his place, they fix the pipe anyway but Tony smashes it and a heated exchange results.


Yasser’s boss tries to arrange a truce between the men, but it becomes violent when Tony says “I wish Ariel Sharon had wiped you all out!” and Yassar loses it and punches him in the guts, breaking Tony’s ribs. Before long they are fighting in court over the argument, with the extra added twist of their opposing lawyers (Diamond Bou Abboud and Camille Salameh) being father and daughter.


If that engrossing courtroom drama narrative isn’t enough, there’s Tony’s pregnant wife (Christine Choueiri), and both men’s dark back stories involving the roots of the Christian/Palestinian conflicts. Doueiri, whose worked on several of Quentin Tarantio’s films, sheds light on the humanity of both sides of its argument, and gives us a fair, unbiased look at how deep seeded hatred can wreck all kinds of havoc if triggered.