Now playing at an indie art theatre near me: 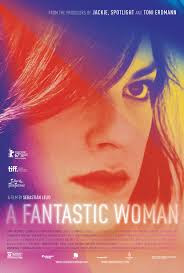 Orlando Onetto (Francisco Reyes), a successful printing company owner in his late 50s, has a romantic evening with his girlfriend Marina Vidal (Daniela Vega), who is a transgender woman.


They are celebrating her birthday, and he surprises her with plans for them to go to Iguazu Falls in South America. Orlando and Marina have a night of passion at his posh apartment in Santiago, but the tone takes a turn when he wakes up in pain in the middle of the night, and Marina takes Orlando to the hospital.


Orlando in the night dies from a brain aneurysum, and a shaken Marina leaves the hospital, and calls Orlando’s brother Gabo (Luis Gnecco) to tell him. She is picked up on the street by the police and questioned back at the hospital. Everyone appears to hold her under suspicion, and she undergoes a demeaning interrogation where she has to strip down in front of the investigators.

Things get worse when she deals with Orlando’s angry, disapproving ex-wife Sonia (Aline Küppenheim), who Marina has to give his car back to, and Gabo who forces her to move out of Orlando’s apartment telling her cruely, “I don’t know what you are!” Worse still, Sonia tells Marina not to come to the funeral.

Through this series of indignities, Marina, who moonlights as a nightclub singer, has sessions with her vocal coach (Néstor Cantillana), works as a waitress, and tries to get on with her life despite being haunted by images of Orlando. 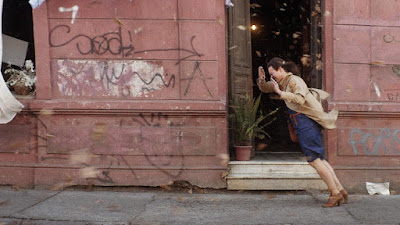 A FANTASTIC WOMEN gets surreal at times with visuals like Marina walking against wind so strong it puts her at an almost impossible angle, and a stunning fantasy of a glittery dance set piece that thrusts her upwards into a confident close-up.

It can be a sad, hard-to-endure experience at times, but Lelio’s film, which he co-wrote with Gonzalo Maza, is ultimately uplifting, and it made a strong emotional impression on me. This has a lot to do with Vega, who puts in a fearlessly convincing performance.

This moving movie opens today in my area, and my fear is that audience may be resistant to seeing a Spanish language film about a trans woman’s grief, but there’s a reason this won the Best Foreign Film at the Oscars earlier this week – its depiction of the resilience and perseverance of Vega’s Marina in the face of such prejudice is simply fantastic.