Opening today at a indie art house near me:

THE DEATH OF STALIN 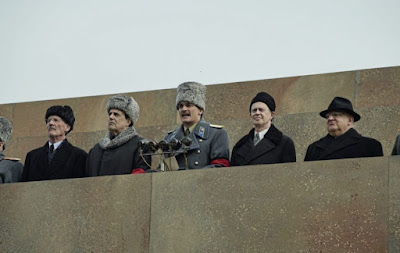 Acidic political satire is what Scottish writer/director Armando Iannucci (IN THE LOOP, Veep) does, and in his third feature, in which he takes on the absurdity of Stalinism, he nails it to the wall.

It’s a pretty ridiculous premise to have a cast of British and American actors playing historical Russian figures – i.e. Steve Buscemi as Nikita Khrushchev – with none of them making any attempt at Russian accents, farcically fretting over how to handle the unexpected death of dictator Joseph Stalin in 1953 Moscow, but somehow Iannucci pulls it all off with deliciously wicked abandon.

The film’s opening titles tell us that “For 20 years, Stalin’s NKVD Security Forces have imposed the great terror,” and “those on Stalin’s lists of ‘enemy’ names are arrested, exiled, or shot,” which are, to say the least, unusual statements for which to set up a comedy.

While each of these men has feared being put on Stalin’s list before his passing, now they have to figure who will take his place through much bickering, some of which takes place while the body of Stalin (Adrian McLoughlin, who has some lively moments in the first 15 minutes before he has a stroke) lies dying on the floor beneath them.

They are torn about getting a doctor because all of the best physicians are in the Gulag or dead because under suspicion of trying to poison Stalin, so they assemble a team of young and old doctors, who the dictator’s daughter Svetlana (Andrea Riseborough) says “look like mental patients.” Beria, the most evil and power hungry of all the fairly despicable characters (or caricatures) here, takes over making the lists, while he grooms the meek vain Malenkov to be Stalin’s sucessor, while Khrushchev is elected to take charge of Stalin’s funeral.

Also muddling up the worried water is Stalin’s drunken son Vasily (Rupert Friend), who bursts in on the autopsy wielding a firearm (Khrushchev to Svetlana: “You father is dead, your brother is shooting a gun – it’s not fine, you’re right.”); and the arrogant appearance of Red Army Field Marshal Georgy Zhukov (Jason Isaacs), who declares “What’s a war hero got to do to get some lubrication around here?” upon his brash entrance.

Buscemi puts in one of his funniest performances, and I’m glad they didn’t replace Tambor (he’s been accused of sexual harassment, and was dropped from the show Transcendence) because he’s “on” too. I also love seeing Palin on the big screen again as the proceedings often recall the silly-smartness of Python parodies, and he has some priceless moments here.

Iannucci, who I was surprised to hear based this film on a graphic novel (Fabian Nury and Thierry Robin’s “The Death of Stalin,” 2017), very much carries this with a vibe that will be familiar to fans of his HBO show Veep, and his similarly toned BBC series The Thick of It (plus its resulting movie IN THE LOOP). His thing is to skewer the twisted ideology under which these selfishly foolish folks clamoring for power operate, and in scene after scene here he hilariously hits his targets.

“This is just f***ing wordplay!” Buscemi’s Khrushchev exasperatedly exclaims at one point, but THE DEATH OF STALIN is a lot more than just that. It’s timely because it deals with the Trumpean subjects of dictatorships, and the spreading of false narratives, but what really hits home is how this film wants us to laugh at how dark and scary things can get.

I’m reminded of that famous quote, attributed to George Santayana, “Those who do not learn history are doomed to repeat it.” Iannucci seems to be suggesting that when if history does repeat, we are doomed if we don’t laugh at it.