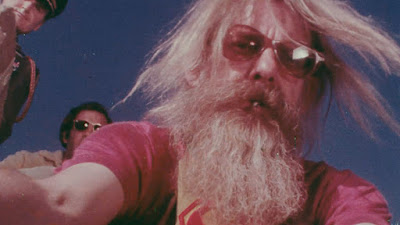 I was looking forward to the second day of Full Frame this year because it offered my most anticipated doc at the festival: Amy Scott’s HAL, about the legendary filmmaker Hal Ashby who made some of the greatest movies, and personal favorites of mine, of the ‘70s including HAROLD AND MAUDE, THE LAST DETAIL, SHAMPOO, COMING HOME, and BEING THERE.


The biodoc is the directorial debut of Amy Scott, whose many previous credits as an editor made me think that was one of the many factors that attracted her to Ashby as he started out the same way (even winning an Oscar for editing for IN THE HEAT OF THE NIGHT in 1968).


HAL fittingly starts off with Cat Stevens on the soundtrack (singing “Miles from Nowhere,” also fittingly), and goes on to tell the story of the great hippy director via lots of clips from his films, and testimonials by folks he worked with like Jon Voight, Jeff Bridges, and Norman Jewison, and disciples like Alexander Payne, Judd Apatow, and Adam McKay.


I teared up more than a few times because Ashby’s movies are a large part of why I love movies. His comic yet simultaneously tragic depictions of such heavy subjects as love, race, and class spoke to me growing up, and I could tell I was among an audience full of people who could relate.


Scott’s choice is right to give the most screen time to recollections about the seven films Ashby made in the ‘70s (the five I listed above and THE LANDLORD, and BOUND FOR GLORY), what Payne calls “an astonishing string of masterpieces,” then quickly breeze through his less successful run in the ‘80s before his untimely death at 59 in 1989 because even hardcore Ashby fans like me gloss over those sad years. I heard a woman in the row behind me at the screening say during the credits: “I think I’ll have a Hal Ashby film fest of my own when I get home!” I think I’ll be soon doing that too.


Not as big a crowd pleaser as last night’s RBG (how could it be?), but a moving, and highly amusing primer of one of the 20th century’s greatest filmmakers.


For the following film, I spent some more time in the ‘70s with Matt Tyrnauer’s STUDIO 54, which tells a tale that’s been told many times about the famous Manhattan nightclub that hosted scores of coked up A-listers enjoying a dance party/orgy-style atmosphere while doormen and bouncers kept the crowds outside at bay. 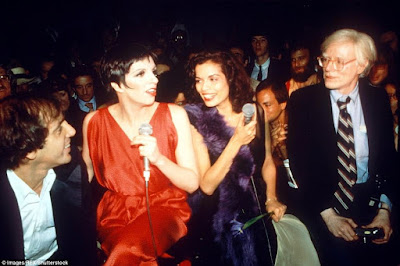 That is only for a little while as the place was horribly run with so much money skimmed that it was easy for the FBI to shut the establishment down shortly after its founder/co-owner, Steve Rubell, stupidly boasted “only the Mafia made more money.”


I grew up hearing tales, and seeing tons of photos of celebrities like Mick Jagger (and his wives Bianca, and Jerry Hall), Truman Capote, Farrah Fawcett, Andy Warhol, Sylvester Stallone, Liza Minneli, and just about everyone who was a star during the Carter era, so a lot of the content of the doc wasn’t new to me, but to folks who have not a clue about these infamously sordid going-ons it should satisfactorily sum up the what went down.


All the expected disco hits, and rise and fall tropes of many a doc about a doomed prospect gave me a big case of déjà vu, but hey, I’m old and jaded. Maybe I’m just saying that because I heard some youngin say “I’ve never even seen a Hal Ashbury movie,” on the way out.


Next up, a couple of short (or shorter as one is nearly featurre length) docs that are paired together because they both deal with fake news, albeit under very different circumstances. First up, there’s Charlie Lyne’s PERSONAL TRUTH, which deals with his obsession with “Pizzagate,” and a home, named Elmm Guest House, in his London neighborhood that’s rumored to be a former headquarters to a pedophile network. Lyne’s conspiracy theories about these subjects are tongue-in-cheek (I think), and he scores some solid laughs with his delivery and clever edits, so I found it to be a worthwhile 17 minutes.


Maxim Pozdorovkin’s OUR NEW PRESIDENT, which followed, is a lot more ambitious at looking at the scope of how propaganda proliferates. It’s a 77 minute compilation of clips largely from the Russian television network, RT (Russia Today), which overwhelmingly display a pro-Trump, anti-Hillary agenda. 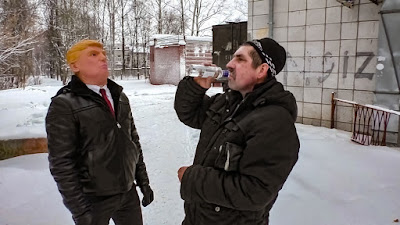 It’s funny then terrifying, then funny then terrifying again how these segments outline how fake news spreads with flashy graphics, and taglines like “The longer you watch, the more upset Hillary Clinton becomes.” Intersperse that stuff with a lot of video of a smug Putin claiming he had no influence in the 2016 American election, an you’ve got video essay gold, right?


Well, not really. While initially the impact of how insane the lengths that such propaganda goes to convince the populous of whatever ridiculous stance is substantial, the effect diminishes upon every news cycle that follows. It ultimately felt like a YouTube rabbit hole playlist that one might mistakenly make a friend to watch. After 30 minutes or so, they’ll be like “Okay, I get it – Russian influence is bad and nobody is taking it seriously enough. So what should we get for dinner? Anyway, that’s how I felt, and I could tell that’s how the people I saw leaving early probably felt too. I did stick it out until the end though.


So that was Day Two of Full Frame 2018. If you haven’t already, please check out Day One.


Coming soon: Day Three, which kicks off with Morgan Nevilles’ Mr. Rogers biodoc WON’T YOU BE MY NEIGHBOR? (another crowd pleasing biodoc, I bet).