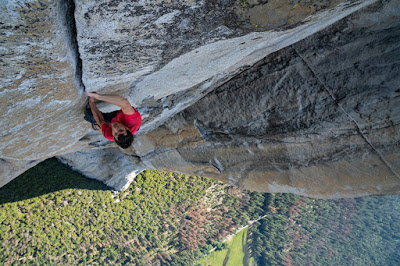 FREE SOLO, which was nominated for Best Documentary at this year’s Oscars, is returning to Marbles IMAX for a week long run today.


Elizabeth Chai Vasarhelyi and Jimmy Chin’s film is one of those docs in which you think ‘That guy is crazy!’


In this case, that guy is rock climber Alex Honnold, who is way into free soloing without any ropes, protective gear, or anything. Honnold has climbed several major mountains in Yosemite National Park, he aspires to scale the tallest mountain in the park, El Capitan, which is taller than the tallest building in the world.


Honnold calls it “the most impressive wall on earth,” and his friend/climbing partner Tommy Caldwell says it’s “the center of the rock climbing universe.”


When the film begins, Honnold is living in a van, which he says he’s done for 9 years, but as the film progresses we learn that he has a new girlfriend named Sanni McCandless. McCandless is, of course, scared for her boyfriend every time he free solos up a mountain. “I’m not super stoked when he goes soloing because he’s already a big part of my life.”


Despite his passion and adventurous spirit, Hollond is shown to be an odd bird from an unemotional family. He tells us that when he was 23 he taught himself how to hug. Yep, an odd bird.


At various points, we get a sad montage of free solo climbers who fell to their deaths, and a history, with vintage photos, of the El Capitan mountaineers who’ve been tacking the granite monolith since the late ‘50s, but mostly we follow Holland’s dream to be the first one to scale the epic slab.


Most of the last half hour of FREE SOLO concerns Hollond’s climb, and it’s a breathtaking and heart pounding sequence full of amazing footage of the man and the vast mountain range around him that made me wonder repeatedly how they filmed him.


Turns out that the cinematographers, including co-director Jimmy Chin, Clair Popkin, and Mikey Schaefer, had climber cameramen, some of whom climbed (not free solo) ahead of Hollond to get primo shots of the action.


This documentary begs to be seen on the big screen, so the IMAX option is one that should really be taken advantage of – even though it wasn’t shot in IMAX.


Raleigh, N.C. residents who want to see FREE SOLO during its week long engagement at Marbles IMAX should visit imaxraleigh.org for tickets, and show-times.