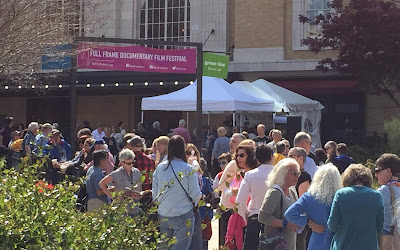 There’s a lot to cover from my third day at the Full Frame Documentary Film Festival this year so let’s get right to them. These entries are more blurb-y than usual because it’s a long roster, and I’m exhausted from the onslaught of docs. 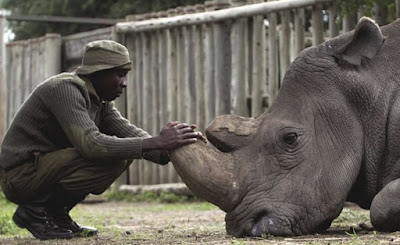 At first KIFARU was killing me as it was drawn out and had a skimpy storyline mainly involving watching James and JoJo walk around with rhinos, but a compelling narrative forms, and I really began to feel for the 45-year old Sedan.

James tells us that when Sedan was born, “thousands of northern white rhinos roamed Africa,” but “violent wars and intense poaching drove these rhinos towards extinction.” Later in the film he concludes that “extinction is the definition of human extremes of greed.” But as heartbreaking at Sudan’s death as the caretakers and the audience, there is a silver lining in that the rhino’s DNA can be used by scientists to possibly clone the species. KIFARU * may have moments that make it the saddest doc I’ve seen at this year’s festival but it’s also among the most endearing. 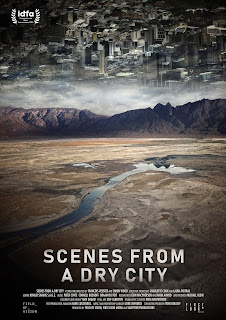 Following that was François Verster and Simon Wood’s SCENES FROM A DRY CITY, a 12 and half minute short about the water crisis in Cape Town, South Africa. Massive drought hit the region in 2015, and continued in the years since forcing residents to pay for very limited quantities or seek elsewhere for water. But this fine film is more about imagery than information as gives us stirring shots of people struggling to find water by even dancing with flags to make it rain, bleak landscapes with dried up lakes, and police trying to enforce water regulations.

Alexander Glustrom’s MOSSVILLE: WHEN GREAT TREES FALL, which came next, is about the town of Mossville, Louisiana, a community founded by former slaves that is threatened by a high concentration of industrial plants and their toxic emissions. 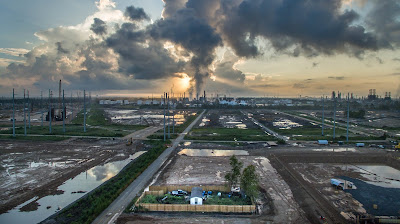 One resident, Stacey Ryan, refuses to pack up and move from his house which is in the way of a large factory’s expansion. “Welcome to beautiful downtown Mossville – population: one,” Ryan sarcastically says at one point.

While security from the South African-based chemical company Sasol that’s creeping closer to his property harass him, Ryan also has to deal with sickness, no doubt caused by the chemical exposure from the nearby plant. Many moments in MOSSVILLE are rich with poignancy as residents lament about the history of their area, but overall it’s an angering portrait of how uncaring corporations can cause fence-line communities to crumble. Another devastating doc in a festival full of them. 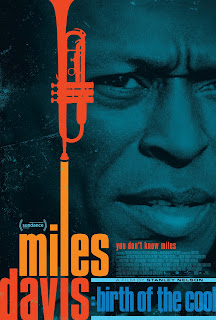 Stanley Nelson, who directed the day’s last film, MILES DAVIS: THE BIRTH OF THE COOL, is no stranger to Full Frame, having had several of his docs, including JONESTOWN: THE LIFE AND DEATH OF PEOPLES TEMPLE, THE FREEDOM RIDERS, and THE BLACK PANTHERS: VANGUARD OF A REVOLOUTION, screen at the festival over the years (Nelson also won Full Frame’s Tribute Award in 2012).

Nelson’s latest is a musical biodoc of the jazz legend Miles Davis, which by its title made me think it was specifically about Davis’ work in the ‘50s as there was a compilation covering that period by the same name, Birth of the Cool. But, no, it’s a career overview that traces Davis’ history from his birth in Alton, Illinois in 1926 to his death in Santa Monica in 1991, via scores of engrossing performance footage, little seen photos, and testimonials by folks like Herbie Hancock, Quincy Jones, Ron Carter, Wayne Shorter,

This material is decorated by narration provided by actor Carl Lumbly reading in a familiar rasp from transcripts of 55 hours of Davis interviews. There are also intriguing bits of studio outtakes from such as the master trumpeter’s iconic work, Kind of Blue. The film doesn’t shy away from Davis’ darkness – his drug use, and spousal abuse * are touched upon as much as his jazz innovations.

From the ‘40s bebop era to his electric period of the ‘70s, which was highlighted by one of his most successful albums, Bitch’s Brew, this doc provides a non flashy straight forward portrait of Davis for the uninitiated. It may be too formulaic a doc for the hardcore, but I bet even they will dig some of the rare treats within.