Now playing at arthouses, multiplexes, and drive-ins (okay, maybe not at drive-ins) everywhere: 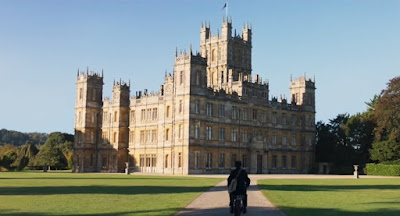 The aristocratic Crawley family and their staff from the British TV smash, Downton Abbey, make the leap to the big screen in this fluffy, frothy, yet charmingly fine film which is currently the #1 movie at the box office.

Taking place in 1927, three years after the events of the sixth season of the show, this update concerns the returning cast (nearly every member of the sprawling ensemble is back) dealing with a visit by the King and Queen (

Since Carson has returned from retirement to reclaim his butler position, this puts the film (and the series’) semi-villain Thomas Barrow (Robert James-Collier) out of a job (a familiar predicament as his job was always on the line on the show) and he heads into town for his own little racy adventure.

Then the staff finds out from the King’s crew that they won’t be need for the event as the royal staff will fulfill the duties of cooking, serving, cleaning, and the like. This leads to a plan to sabotage the visiting servants in comical ways so that they can do their treasured work to “restore Downton’s honor.”

There are a few other little subplots, but that’s all I’ll go into. DOWNTON ABBEY: THE MOTION PICTURE is an enjoyably breezy piece of glossy entertainment, but it’s really just a super-sized episode of the show. The only really cinematic moments, courtesy of cinematographer Ben Smithard, are when the camera circles the exteriors of the stately house of the title (in real life it’s Highclere Castle), and in some tasty angles in the large interiors.

Also, with a cast so large like this, many roles are reduced to mere cameos. For example, Coyle’s Bates, a very significant character on the series, gets like three to four lines here. But screenwriter, Julian Fellowes, who created and wrote or co-wrote the entire series, mostly juggles the various strands deftly, and with plenty of well-earned humor. Director Michael Engler also handles the material with amusing aplomb, something he’s had a lot of experience with as he’s helmed choice episodes of such notable shows as My So Called Life, Six Feet Under, 30 Rock, The Big C, Unbreakable Kimmy Schmidt, and Downton Abbey itself.

Fans of the show should love this film follow-up, and with its major success, it just may be just the beginning of a new franchise.

The movie has been structured so that folks who haven’t seen the series should be able to find a way in, but I’d say that it will largely help to have some sort of working knowledge of what went down over those six seasons before taking it on.