Now out on Blu ray and DVD:
ECHO IN THE CANYON 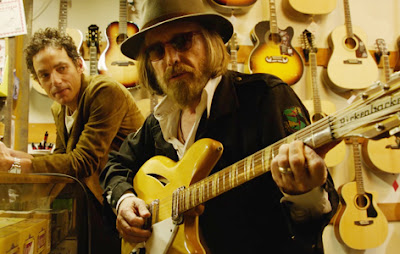 This rock doc opens with the definition of the word “echo” – “a close parallel or repetition of an idea, feeling, style, or event” – while the shimmering guitar opening of the Byrds’ “Turn, Turn, Turn” plays. We then proceed to hang with Jakob Dylan (leader of the Wallflowers; son of Bob) and Tom Petty (in his last film interview) as they check out guitars at Truetone Music in Santa Monica.

From there the credits tell us that the film is paying tribute to the music of The Byrds, The Beach Boys, Buffalo Springfield, The Association, and The Mamas & The Papas.

Exploring the the Laurel Canyon scene, where many of these musicians migrated in the ‘60s, this documentary depicts Dylan driving around Los Angeles to meet up with such iconic artists as Jackson Browne, David Crosby, Roger McGuinn, Graham Nash, Stephen Stills, John Sebastian, Ringo Starr to casually talk about the area’s musical mythos.

But that’s just half of it, as the rest of the film concerns a concert staged at the Orpheum Theatre in LA in late 2015 in which Dylan sings a roster of classic Southern California songs with the likes of Jade, Fiona Apple, Regina Spektor, Cat Power (Chan Marshall), and Beck.

At the start of the concert, director Slater, who had been the President of Capitol Records from 2001-2017, explains to the audience that they are celebrating the 50th Anniversary of when McGuinn exercised the most pronounced influence over rock music with only the opening notes of The Byrds’ debut album. 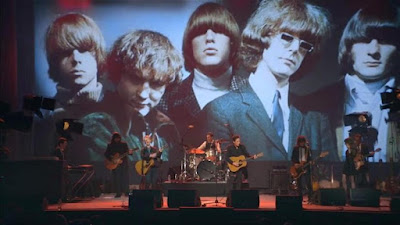 Now that’s certainly true, but while there are a number of solid performances included from that star-studded event, I would prefer to see more vintage footage, hear more stories from the sunny hippy era, and see the doc give shout outs to more of the cast of notable characters who were residents of the Canyon. Especially since Frank Zappa, one of the first of the artists that made his home there, is glossed over, while Joni Mitchell and the Doors’ Jim Morrison aren’t mentioned at all. For a film that’s only an hour and 22 minutes long, that’s a real shame *.

I still enjoyed a lot of ECHO IN THE CANYON, and can really feel Dylan, his interviewees, and director Slater’s genuine love for the wealth of historic rock music (or rock pop, or folk rock, or pop rock folk, etc.) so I’d definitely recommend this film to those that are interested. For those who aren’t, it might be a bit much of Dylan playing a bunch of ‘60s songs with his friends instead of a real breakdown of what made Laurel Canyon so tuneful.

* The Blu ray and DVDs of this doc contain no bonus material so that adds to the shame.