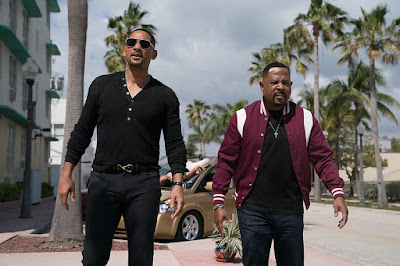 The
17-year long wait is finally over as the third and final chapter in the mighty BAD
BOYS saga opens tonight. This entry has all the things you’d expect from a BAD
BOYS movie: it’s too long, it has many instances of crappy comedy, it’s decorated
with tons of sweeping shots of Miami (mostly in time-lapse), and it contains gunfire
and explosions galore.
Now,
the BAD BOYS series has always been about dumb fun as it’s delivered glossy
LETHAL WEAPON-style buddy cop action hijinks once a decade since 1995, so it’s
silly to be too critical of such a wannabe crowd pleaser, especially one released in
January, but I’m still gonna give it a go.
This
time, our heroes, Miami narcotics cops Marcus Burnett (Martin Lawrence) and
Mike Lowrey (Will Smith), realize that it’s time to hang up their badges and
guns and take it easy into old age. Well, not really. Only Lawrence’s neurotic character
is leaning that way, now that he’s a grandfather, but Smith’s smooth Mike is in
denial as jokes about his dying his goatee attest.

Shit gets real when Mike is gunned down by a mysterious motorcyclist, and he’s laid up for months in the hospital with Marcus waiting by his side (and helping to re-dye his goatee). When he comes to, just in time for Marcus’ daughter’s wedding, he is intent on revenge. With the help of AMMO (Advanced Miami Metro Operations), a group of heavily armed, high tech millennial cops (including Alexander Ludwig, Charles Melton, Kate del Castillo, and possible Smith love interest Paola Nuñez), he hunts down the shooter who turns out to be the leader of a Miami drug cartel, Armando Armas (Jacob Scipio), and turns out to be something else, but no Spoilers here.

Lawrence
and Smith, both in their 50s, look pretty good in this last outing – well,
Lawrence looks a little pudgy, but that’s no real issue here. They still have
the argumentative chemistry they had at the beginning of the franchise, though
the shtick of them bickering while dodging bullets got way old in the second
one back in 2003. Luckily, there are a number of good lines and laughs to help us through the predictable formula.
Directors
Adil & Bilall do a good job replicating Michael Bay’s overly slick and jump
cut crazy aesthetics, but they don’t bring much of their own style to the
production. As big and cinematic as they want to go, these movies are really
overblown TV shows, and these Belgian filmmakers are not much more than
directors-for-hire here.
I
did enjoy seeing returning regular Joe Pantoliano as Captain Conrad Howard have
a more significant part than before, and I accepted most of the contrivances
with out much eye-rolling, but just about everything else went down exactly the
way I thought it would.
Maybe
I’m speaking too soon that this is the concluding chapter in the trilogy as
there’s a during the end credits scene (see? Even BAD BOYS movies are adapting to Marvel
methods) that indicates that the game may not be up. Okay, fine – go ahead and
flog this franchise. If there’s as much as a gap between entries as there’s been
in the past, our beloved duo will be nearing 70 next time. Maybe Lawrence’s
Marcus will finally learn the correct lyrics to Inner Circle’s Cops theme song “Bad
Boys” by then.