Skip to content
Opening tonight at a multiplex near you: 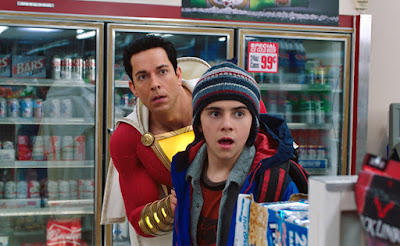 Despite having watched the ‘70s Saturday morning TV series, Shazam!, when I was a kid, I knew very little about the character. I learned when CAPTAIN MARVEL came out last month that DC and Marvel both had characters by that name. But now, I found out that DC’s version was the first, having debuted in 1940 as a competitor to Superman which led to multiple legal battles.

Marvel obtained the copyright to the name and started putting out comics in 1967 featuring a very different incarnation of Captain Marvel than DC’s. DC licensed the character in the early ‘70s, but they couldn’t use the name as it was trade marked by Marvel so the superhero became Shazam! Got it? I think I finally do.

So here’s SHAZAM!, which is the seventh movie in the DC Extended Universe, and one of the better entries in the franchise. That’s because it’s largely a light-hearted, and often hilarious comic book adaptation with a likable cast and a spirit that more resembles Marvel’s SPIDER-MAN: HOMECOMING or KICK-ASS than any other of the mostly dark (WONDER WOMAN is an exception) DC film fare.

The film concerns a 14-year old runaway named Billy Batson (Asher Angel) who is searching Philadelphia for his long-lost mother. After getting in trouble with the law for stealing a police car, Billy is taken to a foster home where he meets Freddie Freeman (Jack Dylan Grazer), a nerdy, wise-cracking paraplegic, who immediately becomes his best friend.

Through a freak occurrence when riding the subway, Billy is transported to some dark ancient temple (called the Rock of Eternity) where a mystical wizard named Shazam (Djimon Hounsou) who asks Billy to put his hands on his staff in order to transfer power to him.

Bill becomes an adult superhero (Zachary Levi, best known as the lead in the 2007-2011 NBC series Chuck) in red tights, a white cape, and a yellow lightning bolt on his chest. Screenwriter Henry Gayden gets a lot of mileage out of the levity of Levi’s talking and acting like a teenager as he learns what powers what powers he has in a farcical sequence set to Queen’s “Don’t Stop Me Now” (because of course it is) in a one of several sequences that make the move come off like BIG meets The Greatest American Hero.

The villain here is the marvelously sinister Mark Strong (also the villain in KICKASS and SHERLOCK HOLMES) as Dr. Thaddeus Sivana, who visited the Rock of Eternity in the film’s ‘70s set epilogue. Sivana, whose baldness can't help but recall Superman's nemesis Lex Luther, wants Shazam’s powers so the second half of the movie involves a power struggle between the two climaxing in an epic, yet overlong, showdown at an amusement park.

There’s a lot of fun to be had with SHAZAM!, but there are a lot of origin story tropes that have become tiresome even with the amusing banter between Levi and Grazer, and what’s with there seemingly always being a convenience store robbery in these movies for our hero to thwart?

But overall I enjoyed Director Sandberg's (the filmmaker behind LIGHTS OUT and ANNABELLE: CREATION funnily enough) SHAZAM! a lot more than CAPTAIN MARVEL, though I doubt it’ll come anywhere near the $1 billion than that movie has made so far. It’s an understatement to say that the output of the DC Extended Universe has been a mixed bag, but with attempts to explore different, more comical tones like this, they might just get their shit together after all.