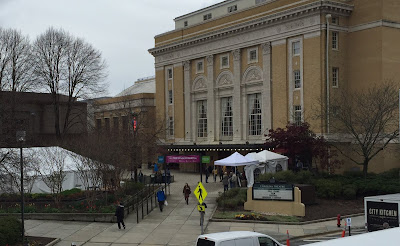 The second day at the Full Frame Documentary Film Festival was really rainy this year. One or more days during the event usually are stormy obviously because of the time of year, and I’m sure that I’ve made this observation before, but I’m not gonna Google myself to see. I’m going to just jump right into the films I saw at the Carolina Theatre and the Durham Convention Center on Day Two.

First up, Mike Attie’s MOMENT TO MOMENT, a 14-minute short about Carl Duzen and Susan Jewett, a long-married couple who first met as teachers – he was a physics teacher; she taught art. 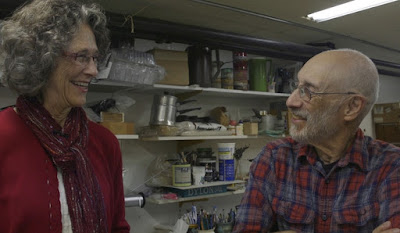 In 2014, Duzen was diagnosed with Alzheimer’s, and one way he deals with it is to take apart old electronics to get to the copper within. Duzen then delivers it to his wife, who then makes art out of the twisted rolls of the red-brown metal.

The short has its share of sad moments like when Susan says of her husband’s dementia, “It’s pretty awful, and especially for a man I married especially for his mind,” but it has a good bit of happiness in it to as we watch the couple dance, reminisce about their first date, and open an exhibit entitled “Carl Duzen: Copper. Denying Dementia Its Due.” Of course, it has to end on a sad note but it’s also a poetic one that I’m sure will stay with me. 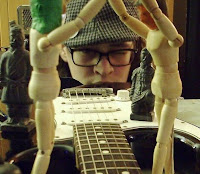 Next up, Cameron Mullenneaux’s EXIT MUSIC about 28-year old Ethan Rice, who we are told up front was born with cystic fibrosis, an incurable genetic disease that leads to severe lung damage and eventually respiratory failure. Rice, who lives with his family in Upstate New York, is a talented, appropriately cynical artist who composes music on his electric guitar and makes really cool-looking stop motion movies with his toys – excerpts of which are shown throughout the doc. Rice’s dad is a Vietnam vet with PTSD, who speaks about his family’s disease prone history. It’s not as depressing as it sounds, but, yeah, it is pretty depressing.

While EXIT MUSIC often plays like a sloppily stitched together collection of home movies, it builds to its inevitable conclusion with purpose. You probably guessed that Ethan is no longer with us, but from all the work we get glimpses of, it looks like he made the most of his time here. Seriously, those stop motion clips are awesome – the stuff he did with toy soldiers is so much cooler than the likewise toy soldier stuff in last year’s floptacular, WELCOME TO MARZEN.

One of my most anticipated docs of the fest followed, Janice Engel’s RAISE HELL: THE LIFE AND TIMES OF MOLLY IVINS, about the late, great legendary Texan columnist, humorist, and political commentator who certainly had quite the mouth on her. 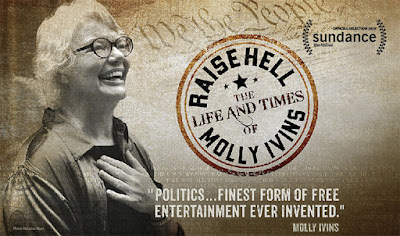 The outspoken liberal scribe, who when working for the Minneapolis Tribune became the first woman police reporter in the city, was a hilarious woman with a very quick wit and there’s lots of it on display here from interviews she did on C-Span (lots of C-Span here), Late Night with David Letterman, The MacNeil/Lehrer Report, and a number of speaking engagements. The woman’s work was often controversial and got her a lot of hate mail, but she appeared not to care or be scared. That also seemed to be her reaction to being diagnosed with cancer in 2000. During this period she wrote or co-wrote a a handful of well received books including two scathing books about her nemesis, George W. (“Dubya”) Bush.

RAISE HELL is a delightfully biting biodoc about a woman whose voice probably resonates now more than it did when she was alive (she passed at age 62 in 2007). My only disappointment with the film is that Ms. Ivins wasn’t there to come out for a Q & A at the end. 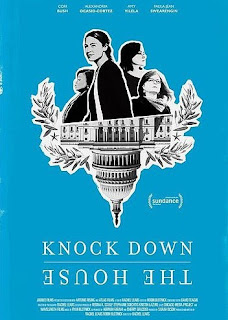 I knew she had to be popular, but I didn’t know how much of a rock star Alexandria Ocasio-Cortez is to Full Frame’s largely liberal audience before seeing the opening of Rachel Lears’ KNOCK DOWN THE HOUSE. We see Ocasio-Cortez putting on makeup before going onstage at an event, and the crowd around went crazy and applauded. She hadn’t even said anything yet. Anyway, the film follows the 2018 congressional campaigns of New York’s Ocasio-Cortez, and three other progressive female candidates – Missouri’s Cori Bush, Nevada’s Amy Vilela and West Virginia’s Paula Jean Swearengin.

This poli-doc is very entertaining and has an undeniably inspirational spirit, but it’s a bit fluffy and can feel like reality TV at times. It’s so packed with the passion of these driven women that I’m going to let those quibbles slide. As expected, Ocasio-Cortez gets the bulk of screen-time, but the shit-kicking Vilela gets to steal the show a few times with such comments as “We’re coming out of the belly of the beast kicking and screaming!”

Finally, I ended Day Two with Penny Lane’s HAIL SATAN?, which is obviously about Satanism – the Satanic Temple particularly and their ongoing fight for separation of church and state. 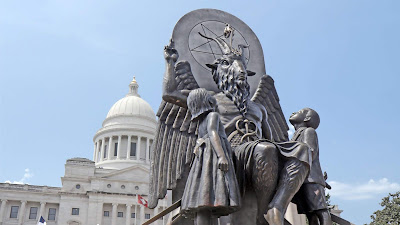 The Church’s co-founder Lucien Greaves is the dominant voice here telling us about the religion’s mission – all very informative to me as I was unaware that the Satanic Temple existed (it founded in 2013 so I can be forgiven for not being up to date), and that there was any kind of movement.

One amusing thread (they’re all pretty amusing) in this film involves the Satanic Temple’s attempts to erect a statue of the horned demon Baphomet on Oklahoma and Arkansas state grounds. As you can see from the picture above, they succeeded. While the doc is very funny with a lot of lines that land, director Lane (NUTS, OUR NIXON), obviously gets where these people are coming from and gets us there too. She gives us enough insight into the ideology that when one of her interview subjects says, “As a Satanist, I believe that confronting injustice is an expression of my satanic faith,” it doesn’t come across as ironic at all.