Skip to content
Opening tonight at a multi-plex near us all: 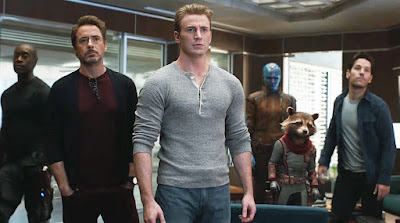 We’re now 22 films, and three phases into the Marvel Cinematic Universe, which began in 2008 with IRON MAN.

Apparently all three phrases are now known as “the Infinity Saga” since they largely concern the McGuffin of those glowing multi-colored Infinity Stones that major villain Thanos has been after since early in the franchise. So this is a specific storyline that

’s gone through most of a series that's well into the double digits. Talk about never-ending, huh?

But to many casual movie-goers, that background matters less than if this blockbuster behemoth starring every Marvel character ever (well, close to it anyway) is worth its bloated three hour running time as the mega movie event of 2019 (at least until STAR WARS: THE RISE OF SKYWALKER comes along).

Well, I believe both hardcore and casual fans will be satisfied by ENDGAME. It often plays as a greatest hits of the series, and gives every Avenger and guest star their moment to shine. And that’s a lot of moments as there are lots and lots of characters to cover.

In the last entry, INFINITY WAR, Thanos (a CGI-ed Josh Brolin), having finally gathered all the stones, snapped his fingers, and made half the universe, including half of the Avengers, crumble into red dust.

Despite Ant-Man saying that “BACK TO THE FUTURE is a bunch of bullshit,” our superheroes run around through scenes from previous movies, most notably the capturing of Loki (Tom Hiddleston) in the first Avengers, in a manner that heavily recalls BACK TO THE FUTURE 2. These sequences are a lot of fun, and touching at times like when Downey Jr.’s Tony running into his father Howard Stark (John Slattery) in 1970.

After all of these time hopping shenanigans which, aside from BTTF also draw from many other movies that draw on the device (at one point, Don Cheadle’s James Rhodes/War Machine even reels off a list of time travel films including TIME COP!), we come to the big ass battle finale which, to me, apes the finale of yet another time travel movie, TIME BANDITS, but I won’t tell you how here.

Shit gets real as a couple of major players are killed off, and the somber finality of it all is plenty palpable. I mean, sure they can always reboot these characters later, but it’ll be with different actors/actresses and it just won’t be the same.

Yes, ENDGAME is way too long, but I guess it had to be to fit in all of these people and their individual storylines. But why have so much of Bradley Cooper’s Rocket Raccoon, when he never says anything that’s particularly funny? Much better is Rudd, whose comic charm goes a long way, and Ruffalo who spends pretty much the whole flick inCGI-ed Hulk mode, because he finally found a way to work with his

There are so many characters that the epilogues for many of them just go on and on in the last half. That goes for much the chaotic climax too.

CAPTAIN MARVEL is still playing in many theaters, but Brie Larson’s Carol Danvers is prominently featured here, maybe because she’s pointing the way towards phase four since all these old-timers are fading.

While I may consider it extremely overstuffed, I bet most audiences will find AVENGERS: ENDGAME to be a satisfying three course meal. Once again, the MCU has served up an impressive, blindingly shiny platter of their choice concoctions which scores of fans will be feasting on until, well, again, the next STAR WARS.